The percentage of people aged 15-64 who are in work has continued to stay under the OECD average since before COVID-19 hit the globe. And its lackluster ranking continued throughout 2020.

While the average of 34 OECD members reached 66.8 percent in employment rate in the first quarter of 2021, the figure for Korea stood at 65.7 percent. 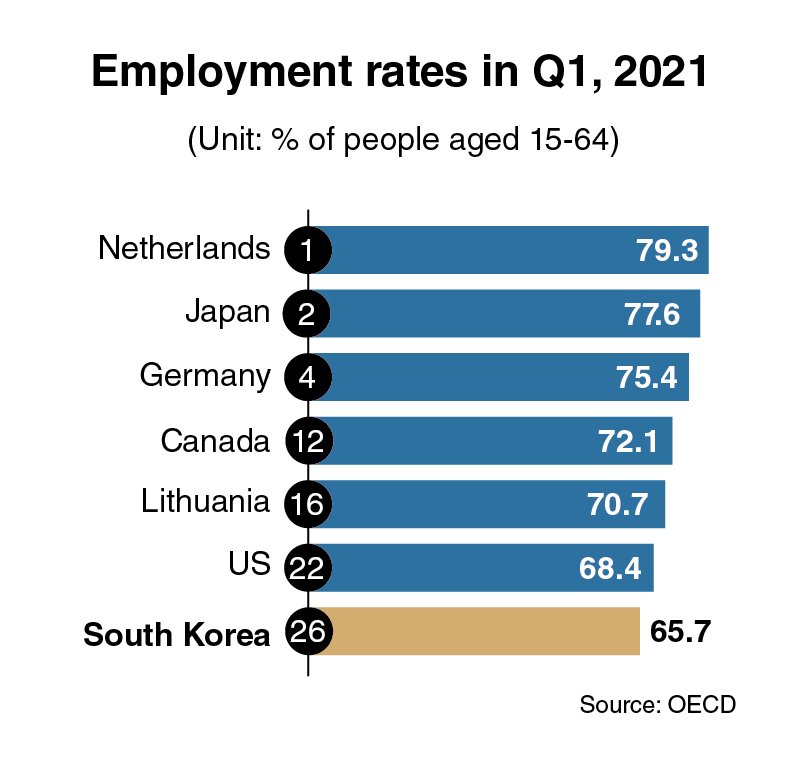 Korea ranked 26th, while three of the total 37 OECD members -- Iceland, Switzerland and Turkey -- were not included in the organization’s comparison of the first-quarter performance.

Given that Iceland and Switzerland were in the top 5 in past quarters, Korea‘s final ranking is expected to be 28th when the two release the first-quarter figures.

The nation lagged far behind its Asia-Pacific neighbors, such as Japan, which was No. 2 among the 34 members with a 77.6 percent employment rate. New Zealand was No. 3, with 76.9 percent and Australia No. 5, with 74.3 percent.

Many emerging economies also outstripped Korea, including the Czech Republic (eighth) with 74.2 percent, Estonia (11th) with 74 percent, and Hungary (13th) with 72 percent.

The Netherlands topped the list at 79.3 percent as of March 2021. Among others in the top 10 were Germany (fourth), the UK (sixth), Norway (seventh) and Denmark (ninth).

Though the pandemic dealt a severe blow to the European continent, the average of the eurozone countries and the European Union came to 66.9 percent and 67.5 percent, respectively. The US (21st), with 68.4 percent, also outpaced Korea

When it comes to the OECD comparison of those aged 15-24, Korea recorded a 25.5 percent employment rate in the first quarter of the year.

A core problem in Korea’s job market is the high portion of nonregular positions -- which includes contract workers, part-timers and those in temporary employment. This is continuously weakens job security.

According to the OECD, temporary workers made up 26.1 percent of all salaried workers in Korea, which marked the second highest out of 35 members (two of the total 37 were excluded in research) as of 2020.

A temporary employee is defined as a salaried worker whose job has a predetermined termination date.

According to Statistics Korea, nonregular workers -- the broader category that includes the OECD-stipulated temporary workers -- made up 36.3 percent of the country’s salaried workers as of 2020, up 3.4 percentage points from only three years earlier.

In contrast, the number of regular employees dropped by about 400,000 from 13.42 million to 13.02 million over the corresponding three-year period.