“I was not sure if I am good enough for it,” he told local reporters during a joint media interview conducted via Zoom on Tuesday. “At the same time, I did not want to be arrogant and reminded myself of the thought that I had when I started acting.”

He figured the best way to address his concerns was to prepare as much as possible.

“When I was reading through the script before the production, I told the director that I want to practice the entire script. Because I thought knowing the flow of how the situation changes constantly is the key to the movie, I practiced it a lot,” he said.

“Hard Hit” introduces Sung-kyu (Jo Woo-jin), who works as a manager at a bank in Busan. One morning, he receives an anonymous phone call while driving his two kids to school. The stranger on the phone tells Sung-kyu there is a bomb under his car seat.

The actor added that he analyzed his character thoroughly before shooting the action flick.

“He is realistic. To protect his work and family, he looks at the world with a realistic viewpoint and lives accordingly. He believes that this is the way to protect both,” Jo said.

For Jo, filming car chase scenes in the crowded city of Busan for the movie was also burdensome.

“Even if the chances are not high, I had to be on my toes for any accident that might occur. There were staff that were hanging on the car and also standing close to the car,” he said. “I had a few nightmares of car accidents when filming. I woke up around 4 a.m. many times. I am glad nothing bad happened.” 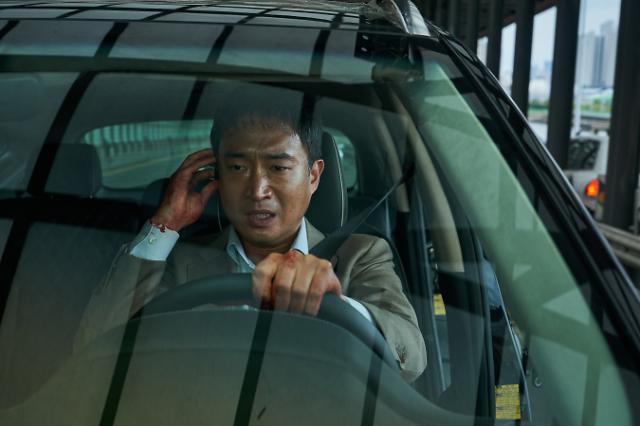 "Hard Hit” stars Jo Woo-jin (CJ ENM)
During the conference, he also talked about what it was like to perform with Lee Jae-in, who played his daughter in the movie.

“When we first met, we decided to call each other dad and daughter. I tried to have a lot of conversations with her like a real dad and daughter,” he said. “Also when we were shooting the movie, I told her that if she needs anything she can feel free to tell me, so she gave me feedback freely.”

Jo also expresses gratitude toward director Kim Chang-ju for casting him and leading him when playing Sung-kyu.

“I told him that he is a magician,” he said. “When filming, he pictured how he would edit the scenes and gave direction. Also, he was both poetic and logical.”

The director is more widely known as the star editor of popular Korean films “Snowpiercer,” “The Terror Live” and “Tunnel.” This is Kim’s film debut at the helm.

When asked what he would do if he received an unidentified number, he said he would not pick it up.

“Before, I would pick up all incoming calls. Even spam calls. But after this movie, I am sick of calls from unknown callers,” he said.