"Untitled (FDWHBFTU)” by Daniel Boyd (Kukje Gallery)
Australian artist Daniel Boyd has presented his identity as part of a native tribe of the country, challenging Western hegemony through his convex-dot paintings that ask radical questions of the audience about their identity, roots and true self.

The artist’s second solo exhibition, “Treasure Island,” in South Korea is running through Aug. 1 at Kukje Gallery in Seoul, presenting 24 works including a video unveiled for the first time in the country.

"I think there is something important about lineage or ancestry I find. For a lot of people in history, a lot of First Nations people, it’s a big part of who they are,” Boyd said in the video interview released by the gallery. “We have the oldest continuous culture on Earth and I think it’s important to celebrate that as well.”

The exhibition’s title “Treasure Island,” from the 19th-century novel by Robert Louis Stevenson, is the core concept of his works in the exhibition as a narrative of “stolen wealth” or “piracy.” Boyd has done works that reference literature and films including “Treasure Island,” which remind him of narratives of colonialism and imperialism. 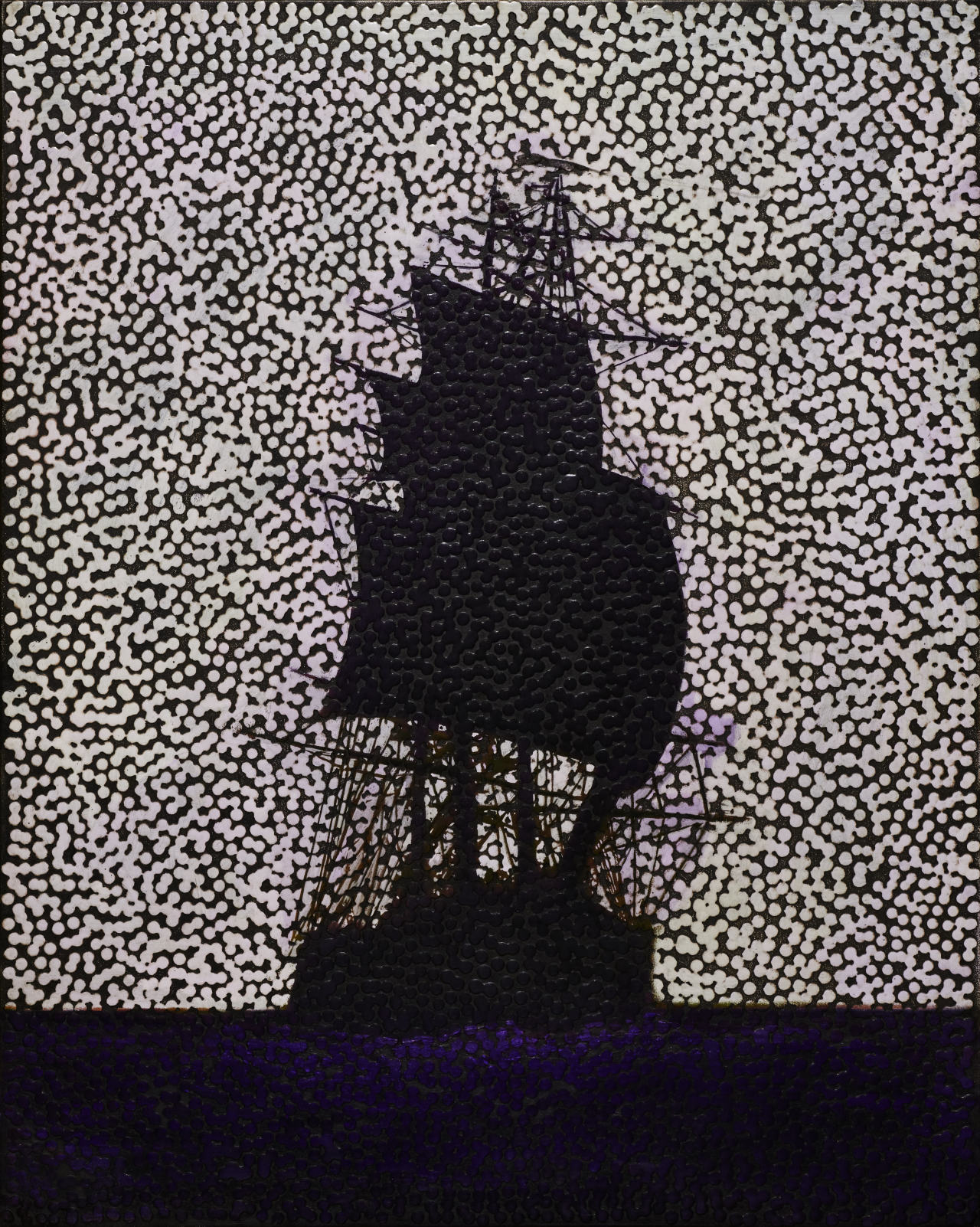 "Untitled (FFITFFF)” by Daniel Boyd (Kukje Gallery)
"The idea of Treasure Island was present in my first body of work when I was at the university and high school. It was part of a series called the ‘No Beard’ works. They were looking at icons of colonialism in Australia,” Boyd said. “I was using piracy as a language to present these icons (Lt. Cook, Joseph Banks and others integral in setting up the colony).”

The numerous convex dots that fill the surface of the canvas represent the artist’s idea of how we should collectively understand something maintaining plurality or multiplicity. Those dots are lenses of perception “trying to create a situation where you have to acknowledge the space between yourself and the other, but in (doing so,) acknowledging difference and celebrating difference,” Boyd said. 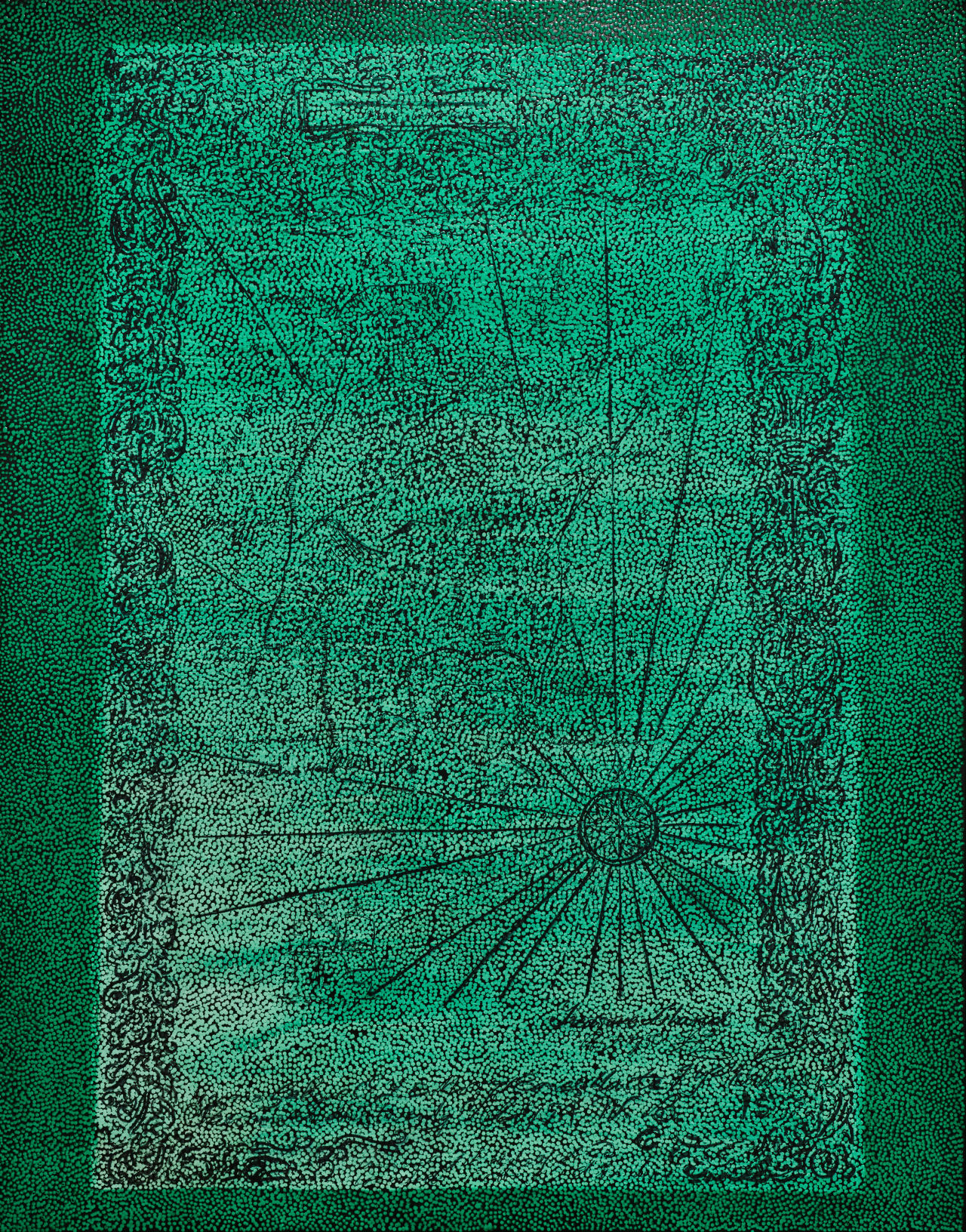 "Untitled (TIM)” by Daniel Boyd (Kukje Gallery)
Boyd represented his personal roots in some paintings like “Untitled (GGASOLIWPS),” which depicts his great-grandfather Harry Mossam, who was a part of the “stolen generations” of Aboriginal children in the country who were forcibly removed from their families by the government stretching from the 1890s to the 1970s.

Some of his works particularly resonate in South Korea, which endured its own heartbreaking history of colonization from 1910 to 1945 under Japanese imperialism.

The media work entitled “Rivers” is accompanied by sounds produced in collaboration with DJ Leo James, based in Melbourne, Australia. The video work, which is streamed in the dark space, shows numerous dots reminiscent of his convex dot paintings.

“I had done a residency at the Natural History Museum in London and while I was there, I got to hold a piece of the moon and a piece of Mars at the same time,” Boyd said. “The video works look at dark matter as a metaphor to connect these things, how we as humans relate to time and space, or acknowledging that connection to the expansion of the universe.”
By Park Yuna (yunapark@heraldcorp.com)