The exhibition “Chung Sang Hwa” at MMCA Seoul is a comprehensive exploration of the artist, including recent signature works that feature grid compositions, demonstrating Chung’s own method of “peeling off and filling in.”

“‘To reveal is to value the quality of it. It is because the back of the plane needs to be considered as well. If there is the back, the back of the back is also considered to be existing,” Chung said in a video interview with the MMCA. “I guess there is another thing behind it. For me, the plane is concentrated in the expanded plane, so a single plane goes into infinity. It goes into infinity and beyond, so the canvas is revealed,” he said. 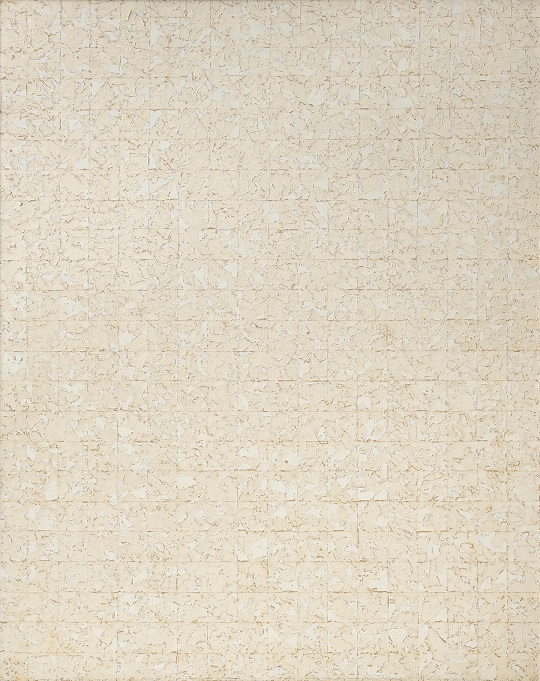 "Untitled" by Chung Sang-hwa (MMCA)
Chung first applies kaolin on a canvas repeatedly to create a layer that is 3 to 5 millimeters thick, which takes about a week. Then he holds the canvas along the vertical and horizontal lines that he has marked on the back, creating natural cracks and crevices on the surface.

He repeatedly peels off the gridded kaolin pieces and fills in the empty cells with layers of acrylic paint. The labor-intensive process explores the spirit of infinity.

The exhibition showcases more than 100 artworks encompassing his early self-portrait works and the 3-meter-tall paintings created with his innovative techniques. The artist began exploring white tones for his works after he realized colors were a burden, he said.

“Colors gradually became burdensome, (colors) became an obstacle to content. As I came to this conclusion, I gradually suppressed colors,” Chung said in the interview.

Born in 1932 in Yeongdeok, North Gyeongsang Province, the artist was admitted to Seoul National University’s painting department in 1953 when the Korean War (1950-1953) was still going on. He represented South Korea in prestigious international art events including the Biennale de Paris in 1965 and the Bienal de Sao Paulo in 1967.

Korea’s dansaekhwa paintings -- also known as monochrome paintings, an art form associated with the practice of emptying one’s mind by repeating the same action -- grabbed international attention in the 1970s. Chung was less famous during this period than other dansaekhwa artists such as Park Seo-bo and Ha Chong-hyun.

“The exhibition provides a retrospective of Chung Sang-hwa’s 60 years of artistic endeavors. He has contributed significantly to the status of Korean abstract art, and it (the exhibition) is a chance to shed light on the artist’s works in the context of Korean art history.”

The exhibition consists of four main sections -- “Experimentation on the Abstract,” “Transition to Abstract Monochrome Painting,” “Perfection of the Grid” and “Beyond Monochrome Painting.” There is also a special section that explores Chung’s career with archival records. The exhibition runs through Sept. 26, and online reservations are required. For reservations, visit www.mmca.go.kr.