Government policymakers and lawmakers from the Democratic Party of Korea last week agreed to work together to introduce what is called the cooperative profit-sharing system. The controversial scheme is to be put into practice as early as February, if a law designed to provide incentives to participating companies is enacted within the year as planned.

While presiding over a meeting on enhancing economic fairness later last week, President Moon Jae-in called on the National Assembly to pass the proposed law before its ongoing regular session ends next month. He said the envisioned scheme would serve as a “way for small and medium-sized enterprises and large companies to grow together.”

Critics indicate the idea of sharing profits earned by large corporations with smaller firms goes against market economy principles and would cause unintended conflicts and confusion in the course of turning it into reality.


Government policymakers have said it would be entirely up to each company whether to participate in the profit-sharing system.

“The government will not enforce the measure, but will provide incentives for companies that have voluntarily adopted the system,” said Lee Sang-hoon, director general for microenterprise policy at the Ministry of SMEs and Startups.

Large companies agreeing to participate in the program would be required to pay a preset share of profits with their subcontractors and suppliers if they achieve a target for profits. In turn, they would be rewarded with various incentives including corporate tax breaks.

The notion of profit sharing was initiated by the head of a presidential advisory panel in 2011 under former President Lee Myung-bak’s administration. In the face of strong objection from the business community and most economists, the idea gained no traction for the remainder of Lee’s term. The government of Lee’s successor, Park Geun-hye, showed no interest in carrying forward with the divisive initiative.

But the Moon administration revived the idea, including the introduction of the profit-sharing scheme in a list of its 100 key policy tasks announced shortly after its launch in May last year.

Many economists warn that the envisioned system would damage the foundation of capitalism by inflicting on the interests of shareholders of large companies. In a recent survey of 100 local professors of business and economics, conducted by the Korea Economic Research Institute, nearly 80 percent said the scheme is not consistent with the principles of the market economy.

Lee Sang-ho, a researcher at the institute, noted that its study had found no case of legislation aimed at sharing profits earned by private companies throughout the world.

The business circle has been skeptical about the government’s promise that it would be up to the will of each company whether to adopt the profit-sharing system.

“Once the system is put into practice, it will become increasingly compulsory in the process of promoting corporate participation,” said an executive at a large manufacturing firm, asking not to be named.

Critics note it will be virtually impossible to evaluate specific contributions by hundreds of subcontractors and suppliers to profits reaped by large companies in order to calculate the proper proportions of profits distributed among them.

There are concerns the envisioned system might force large manufacturers to rely more on suppliers abroad to avoid being pushed to share profits. But foreign suppliers could insist they are also entitled to benefit from the profit-sharing system.

“Offshore suppliers might file complaints to the World Trade Organization if they are excluded from the list of beneficiaries,” said Kwon Tae-shin, KERI president.

To be fair to large corporations, they should be allowed to share losses as well as profits with their subcontractors and suppliers. This logic, however, has been ignored by government officials and ruling party lawmakers in the push to introduce the controversial scheme.

Aside from chipmakers, the country’s key manufacturing firms have suffered from worsening profitability, which analysts say is attributable partly to a set of labor-friendly measures taken by the Moon administration.

“The cooperative profit-sharing system is nothing more than yet another regulatory restriction on large corporations,” said an official at a local business organization, speaking anonymously.

“It would just drive big companies to reduce investments at home and move production abroad,” he said.

There is also worry that the system would widen the gap between SMEs that do business with large companies and those that do not. Roughly 20 percent of small and mid-sized firms here are subcontractors or suppliers of large companies.

“The scheme would also result in discriminating against some innovative SMEs, which have focused on providing parts to global companies abroad,” said KERI researcher Lee.

Associations of small and mid-sized businesses have shown mixed responses to the planned introduction of the system, hoping it would help make the hierarchical relationship between SMEs and large firms horizontal while cautioning against putting pressure on big companies to join it.

Economists note the government seems to be pushing to implement the profit-sharing system to deflect criticism that it has failed to help ease worsening conditions faced by SMEs. They say the government should not leave the responsibility of nurturing SMEs to large companies and needs to work out effective measures to support them by using taxes collected from big firms. 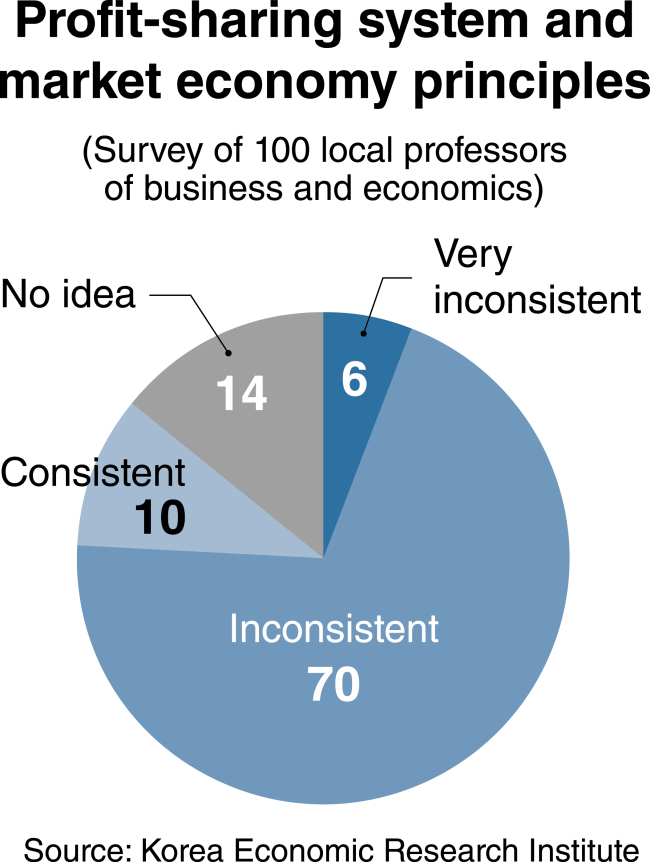