[Dean Baker] The bailout didn’t save us 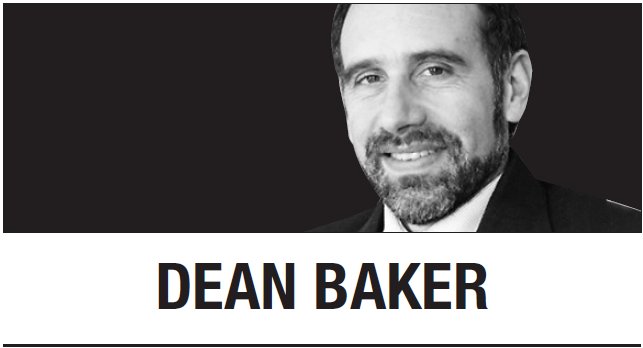 Last week marked 10 years since the harrowing descent into the financial crisis -- when the huge investment bank Lehman Bros. went into bankruptcy, with the country’s largest insurer, AIG, about to follow. No one was sure which financial institution might be next to fall.

The banking system started to freeze up. Banks typically extend short-term credit to one another for a few hundredths of a percentage point more than the cost of borrowing from the federal government. This gap exploded to 4 or 5 percentage points after Lehman collapsed. Federal Reserve Chair Ben Bernanke -- along with Treasury Secretary Henry Paulson and Federal Reserve Bank of New York President Timothy Geithner -- rushed to Congress to get $700 billion to bail out the banks. “If we don’t do this today we won’t have an economy on Monday,” is the line famously attributed to Bernanke.

The trio argued to lawmakers that without the bailout, the United States faced a catastrophic collapse of the financial system and a second Great Depression.

Neither part of that story was true.

Still, news reports on the crisis raised the prospect of empty ATMs and checks uncashed. There were stories in major media outlets about the bank runs of 1929.

No such scenario was in the cards in 2008. Unlike 1929, we have the Federal Deposit Insurance Corporation. The FDIC was created precisely to prevent the sort of bank runs that were common during the Great Depression and earlier financial panics. The FDIC is very good at taking over a failed bank to ensure that checks are honored and ATMs keep working. In fact, the FDIC took over several major banks and many minor ones during the Great Recession. Business carried on as normal and most customers -- unless they were following the news closely -- remained unaware.

Had bank collapses been more widespread, stretching the FDIC staff thin, it is certainly possible that there would be glitches. This could have led to some inability to access bank accounts immediately, but that inconvenience would most likely have lasted days, not weeks or months.

Following the collapse of Lehman Bros., however, the trio promoting the bank bailout pointed to a specific panic point: the commercial paper market. Commercial paper is short-term debt (30 to 90 days) that companies typically use to finance their operations. Without being able to borrow in this market even healthy companies not directly affected by the financial crisis such as Boeing or Verizon would have been unable to meet their payroll or pay their suppliers. That really would have been a disaster for the economy.

However, a $700 billion bank bailout wasn’t required to restore the commercial paper market. The country discovered this fact the weekend after Congress approved the bailout when the Fed announced a special lending facility to buy commercial paper ensuring the availability of credit for businesses.

Without the bailout, yes, bank failures would have been more widespread and the initial downturn in 2008 and 2009 would have been worse. We were losing 700,000 jobs a month following the collapse of Lehman. Perhaps this would have been 800,000 or 900,000 a month. That is a very bad story, but still not the makings of an unavoidable depression with a decade of double-digit unemployment.

The Great Depression ended because of the massive government spending needed to fight World War II. But we don’t need a war to spend money. If the private sector is not creating enough demand for workers, the government can fill the gap by spending money on infrastructure, education, healthcare, child care or many other needs.

There is no plausible story where a series of bank collapses in 2008-2009 would have prevented the federal government from spending the money needed to restore full employment. The prospect of Great Depression-style joblessness and bread lines was just a scare tactic used by Bernanke, Paulson and other proponents of the bailout to get the political support needed to save the Wall Street banks.

This kept the bloated financial structure that had developed over the last three decades in place. And it allowed the bankers who got rich off of the risky financial practices that led to the crisis to avoid the consequences of their actions.

While an orderly transition would have been best, if the market had been allowed to work its magic, we could have quickly eliminated bloat in the financial sector and sent the unscrupulous Wall Street banks into the dust bin of history. Instead, millions of Americans still suffered through the Great Recession, losing homes and jobs, and the big banks are bigger than ever. Saving the banks became the priority of the president and Congress. Saving people’s homes and jobs mattered much less or not at all.


Dean Baker
Dean Baker is a co-director of the Center for Economic and Policy Research. He wrote this for the Los Angeles Times. -- Ed.