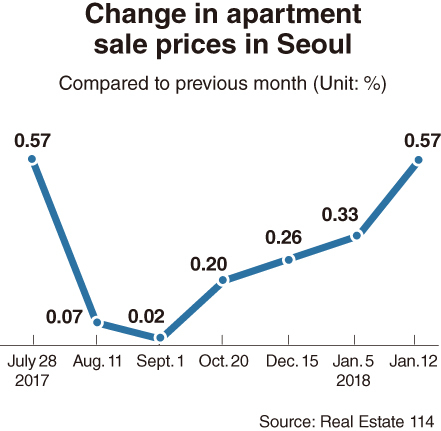 Apartment prices in Seoul increased by 0.57 percent last week, faster than the previous week’s 0.33 percent and similar to the rate at the end of July last year, immediately before the government’s anti-speculation measures were announced, data by Real Estate 114 showed.

Industry watchers said the sale prices of apartments in expensive and popular districts in Seoul such as Gangnam, Songpa and Yongsan have been skyrocketing since the end of last year as the government’s strong measures have raised the scarcity value of apartments in the region available for sale. Progress in reconstruction plans for apartment complexes in the regions have also boosted the price hikes.

On the contrary, areas with more affordable apartments such as Nowon, Seongbuk and Gangbuk have been suffering declining prices and lackluster transactions as even people owning “multiple but relatively cheap” homes face hurdles in getting loans, a real estate agent was quoted as saying. (khnews@heraldcorp.com)