Kosdaq ends down after brief surge past 800 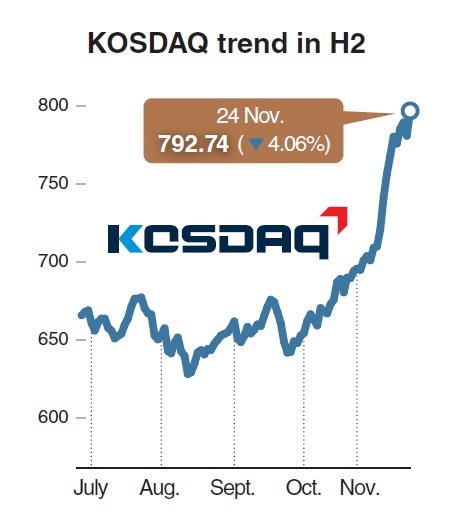 “The US stock market is closed for the night because of the (Thanksgiving) holiday, so there is a strong possibility that the Kosdaq will continue to strengthen as it did yesterday,” said Kim Byung-yeon, an analyst at NH Investment & Securities.

The market previously cooled off on the heels of rising foreign sell-off, however, the market gradually moved toward an upward trend thanks to the increase in listed South Korean taking up the lion‘s share of the market.

Among the Kosdaq‘s top shareholders are the leaders of the on-going biotech boom with Celltrion at 0.14 percent, Celltrion Healthcare at 1.33 percent, SillaJen with 0.08 percent and TissueGene at 0.77 percent.

Over the past month, shares of biosimilar maker Celltrion have jumped more than 50 percent, while its marketer Celltrion Healthcare, has soared 45.4 percent after going public in July. Clinical-stage cancer drug developer SillaJen, after debuting last December, soared by 185 percent during the cited period.

As for whether the current market bourse will be short-lived, local analysts have voiced mixed opinions.

Some analysts say that some of the pharmaceuticals and biotech companies that led the recent sharp rise in the Kosdaq market are bubbling. These experts are warning that current stock momentum resembles the “IT bubble” of the early 2000s.

“The current share price of pharmaceuticals and biotech is bubbling because it is based on the assumption that clinical trials will be successful,“ said Choi Seok-won, head of the SK Securities Research Center. “It is important to note that there is the probability of failure.”

On the other hand, other experts are dismissing the bubble warnings, arguing that it is too soon to call out the boom in the biotech market as being short-term and overvalued.

During a meeting with his chief executives on Friday morning, Choi Jong-ku, chairman of the Financial Services Commission, cautioned that the country’s reputation for lax corporate transparency is the reason behind Korean stock markets being valued 42 percent below leading global markets.

“In order for institutional investors, who are key players in the market, to commit to mid-and long-term investments, corporate transparency is a must,” Choi said.

The FSS added that by the end of the year, the government intends to introduce stricter regulations regarding corporate accounting structures to help boost increased transparency.