The number of employed people in Korea reached 26.84 million in September, marking the largest monthly employment growth since May, according to data compiled by Statistics Korea on Wednesday.

The government data showed that the unemployment rate hit 3.4 percent last month, down 0.2 percentage point from a year ago. The number of newly employed also marked an increase of 314,000 compared to September last year.

On the same day the data was released, the Moon Jae-in government and the ruling Democratic Party of Korea unveiled a five-year plan that included creating some 810,000 jobs in the public sector as part of the president’s prioritized pledges.

The roadmap has five categories, 10 main tasks and 100 policy measures that will cover how to construct jobs and infrastructure fit for the demands of the industries as well as ways to create more job opportunities in the private sector and improve working environments. 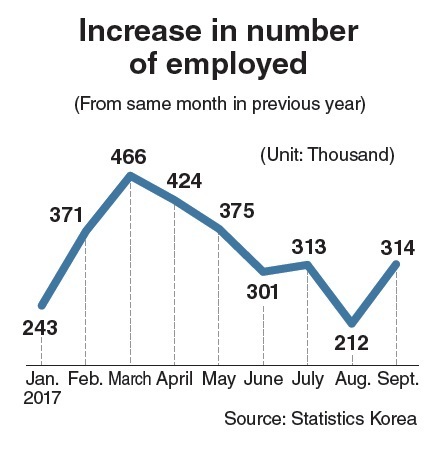 The increase in employment last month was on the back of strong performances in the construction sector, making up a majority of new hires. The number of construction hires reached nearly 2 million, an increase of 108,000 compared to September last year and a difference of 74,000 new hires compared to the sectors’ monthly average of 34,000 hires.

Outside of the construction sector, there were roughly 62,000 hires in the health and social care sectors, while the retail industry hired 48,000 new employees, followed by the manufacturing sector, which saw 20,000 additional hires compared to the same month last year.

While the average unemployment rate among the member countries of the Organization for Economic Cooperation and Development has steadily declined over the past six months, Korea’s jobless rate is still showing signs of struggles.