Last month’s price index of semiconductors was a 14.2 percent increase compared to December last year and marked the highest since December 2014 when it stood at 49.05. According to the BOK, the price hike is attributed to global rising demand for Korean chips. 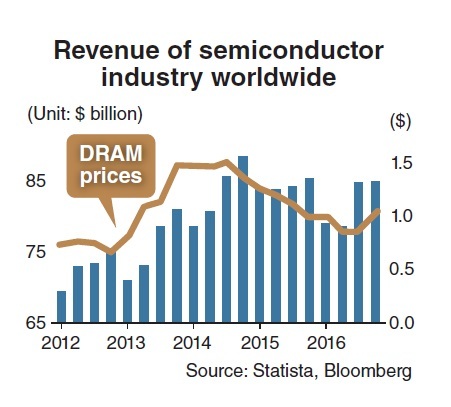 In its recent economic outlook report for this year, the BOK predicted the country’s semiconductor exports would continue to boom on the back of increasing demand as the world’s chip fabrication spending is reaching record levels. The semiconductor memory market is also expected to grow at an annual rate of 3 to 7 percent over the next five years, according to the bank’s forecast.

According a report by Semiconductor Equipment and Materials International last week, Korea is on pace to become the world’s top investor in semiconductor equipment this year as well as next year.

According to the report, an estimated $49.4 billion will be spent on global fabrication equipment this year, an increase of 19.8 percent compared to 2016. The figure also exceeds the previous record of $47.7 billion, which was set in 2000.

The report also predicted this year’s record will be broken again next year by some 7.7 percent, as spending is estimated to reach $53.2 billion.

As for Korea, the country’s fabrication equipment investment this year has been estimated at $12.97 billion, a 68.7 percent increase compared to last year. Korea’s investment also outpaces that of Taiwan, which had been the world’s leading investor over the past five years.