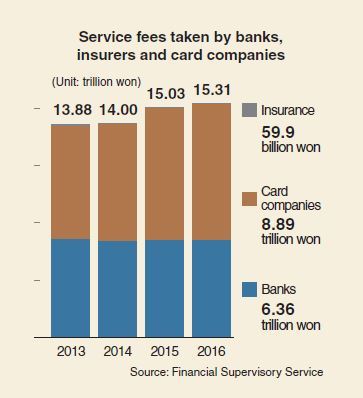 Banks, insurers and card companies have charged a total of 59.9 trillion won in service fees since 2013, according to the Financial Supervisory Service in its report to the ruling Democratic Party of Korea.

The banks have raised profits from the commission amounting to some 6.4 trillion won ($5.6 billion) annually. This year, the banks are expected to raise some 6.8 trillion won.

The service fees charged for money transfer and using an ATM had been lowered in 2011 but they continued to rise in the following years, particularly on the back of the previous Park Geun-hye administration that allowed them to decide on the rate, according to market principles.

The Moon Jae-in administration, on the other hand, has pledged to lower the service fees of credit card companies’ insurance payments.