Korea’s trade surplus with US falls before currency report release

South Korea’s imports of US goods have increased sharply this year in an apparent reflection of Seoul’s efforts to reduce the trade imbalance between the two countries ahead of the release of the US Treasury Department’s latest currency report this week.


According to data from the Ministry of Trade, Industry and Energy, the country’s imports from the US rose 18.8 percent from a year earlier to $12.09 billion during the first quarter of the year. As a result, Korea saw its trade surplus with the US drop 34.2 percent on-year to $4.36 billion over the cited period.

Particularly during the first two months of the year, the country increased imports from the US by 213.2 percent in liquefied petroleum gas, 171.7 percent in bituminous coal, 25.6 percent in auto parts and 16.9 percent in aircraft parts, while the shipment of Korean goods to the world’s largest economy barely climbed. 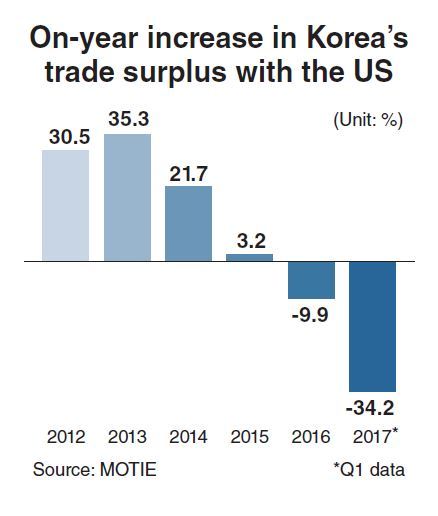 The sharp decrease in trade surplus is seen by experts here as resulting from Korea’s efforts to deliberately increase imports from the US in order to avoid being designated a currency manipulator.

During his visit to the US in January, Finance Minister Yoo Il-ho, who doubles as deputy prime minister for economic affairs, suggested Korea would look for various ways to reduce its trade surplus with the US, the second largest market for Korean exporters.

Korea was one of the six countries put on a monitoring list by the US Treasury last October.

The three criteria for labeling a country as a currency manipulator are annual trade surplus with the US exceeding $20 billion, current account surplus accounting for more than 3 percent of gross domestic product and a net buying of foreign currencies surpassing 2 percent of GDP.

Korea has met the first two. Its annual net purchase of the dollar and other major foreign currencies has never exceeded 2 percent of its GDP since 2011.

The value of its currency has fallen since late last year as foreign capital is flooding into Korean equity and bond markets partly due to expectations the country’s financial authorities will make no attempt to “fine-tune” the currency movement out of concerns about the possibility of being designated a manipulator.

Yoo and Bank of Korea Gov. Lee Ju-yeol have repeatedly said there is a slim chance of Korea being designated a manipulator when the US Treasury releases its biannual currency report around April 14. But the top financial and monetary policymakers have still cautioned the country should not let down its guard against such a possibility.

Shin Se-don, an economics professor at Sookmyung Women’s University in Seoul, criticized them for having made “unnecessary remarks,” which suggested Korea would raise no objection to the designation as a manipulator even though the measure went against the US-set rules.

The cautious and sensitive attitude policymakers here have shown toward the issue may be understood as reflecting their concerns about the impact of designation as a currency manipulator on the Korean economy.

Companies from a country labeled as a manipulator would be subjected to disadvantages in doing business in the US, including exclusion from federal procurement programs.

Korea is more worried that the steep appreciation of its currency following the measure would hamper its exports that have rebounded in recent months on the back of a revitalizing global economy.

Policymakers hope to shore up the country’s economy, which is expected to grow below 3 percent for three consecutive years in 2017, by bolstering outbound shipments amid a slump in domestic consumption.

Keeping or facilitating the downward trend in the trade surplus with the US is expected to help Korea completely do without the possibility of being designated a currency manipulator.

The country’s surplus with the US has hovered above $20 billion since 2013, benefiting from a bilateral free trade accord that took effect a year earlier.

Some observers say the US may not want to worsen the public sentiment here by designating South Korea as a currency manipulator when close cooperation with the new government to be installed in Seoul following the May 9 presidential election is needed to cope with nuclear and missile threats from North Korea.

Korea may also take some ease from the lessened possibility of China being labeled a currency manipulator after it agreed with the US to closely consult on how to cut the bilateral trade imbalance during last week’s summit between their leaders.

China accounted for nearly half of the total US trade deficit, compared with a mere 3.8 percent for Korea.

Experts with cautious views say President Donald Trump’s administration will continue to consider currency manipulator designation as an effective tool to put pressure on major trading partners to be more serious on reducing trade surplus and help increase manufacturing jobs in the US.

Ha Tae-hyung, a former head of the Hyundai Research Institute, said Korea may need to go so far as to erase its trade surplus with the US for a temporary period to fend off currency pressure.