[Live] 1.9 million take to streets, but no violence

Their objections to her leadership center on a scandal involving her longtime friend Choi Soon-sil.

Choi is accused of using her connections to pocket funds from state-run foundations, get her daughter into a prestigious university and interfere with state affairs, including by editing key presidential speeches.

Organizers said 1.6 million people attended the Seoul rally, while 300,000 more took part in other demonstrations around the country.

Below is a timeline of events at the Seoul rally. -- Ed.

The protesters plan to keep going until the early hours of the morning, but most of them have gone home. A few thousand have gathered on Gwanghwamun Square, where performers are still singing. 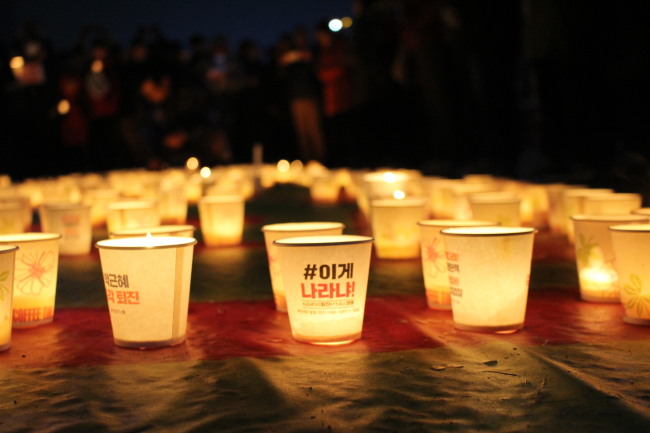 Candle holders bearing the message "Can we call this a country?" - a popular protest slogan during the ralies against President Park Geun-hye (Jo He-rim/The Korea Herald)


The protest is still ongoing, with cultural performances from bands such as NoBrain playing on Gwanghwamun Square.

Nearer Cheong Wa Dae, protesters are peacefully confronting police, singing and chanting, and making speeches from the top of vehicles.

Police are requesting the crowd not to push, citing safety concerns, to boos from the crowd. 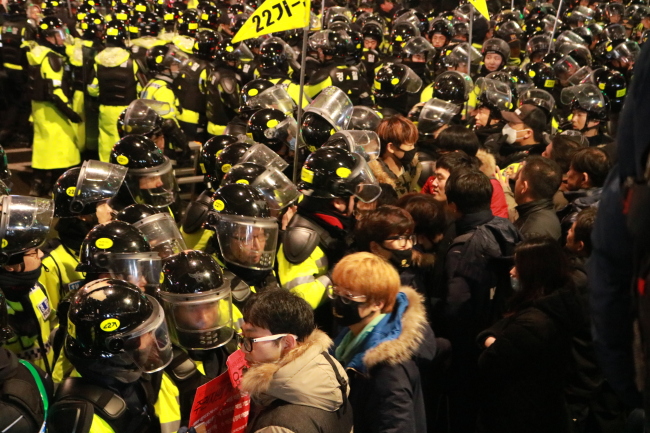 Citizens and police face each other about 200 meters from Cheong Wa Dae as the protesters try to get closer to the presidential palace. (Son Ji-hyoung/The Korea Herald)

The protesters plan to reconvene at Gwanghwamun Square at 11 p.m.

Protest organizers put the total number of protesters at 1.9 million nationwide, with 1.5 million in Seoul. The crowd is slowly shrinking with people heading home in drips and drabs. 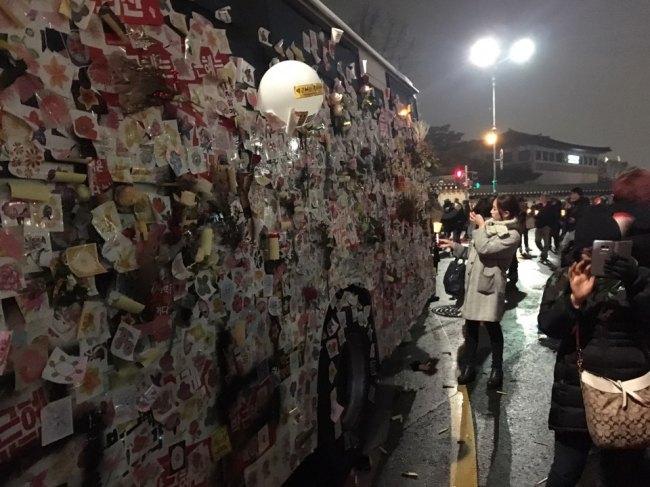 
Protesters are attaching flower stickers to the police buses blocking off access to Cheong Wa Dae. The stickers appeared last week, paid for through arts crowdfunding site 7Pictures. The stickers were artist Lee Gang-hun’s idea to resist the police by turning the wall of buses into a “wall of flowers.”

After last week’s protest, some protesters volunteered to remove them again. Korean National Police Agency chief Lee Chul-sung said he would tolerate the use of flower stickers, citing the title of a book – "Don’t Hit People, Even With a Flower." 7:50 p.m.


In Gwanghwamun, the heart of Seoul, over 1 million South Koreans are waving candles and singing along to legendary folk singer Yang Hee-eun’s “Morning Dew,” as the fifth massive weekend rally against President Park Geun-hye reaches its climax. Tens of thousands more are joining the rally at 60 other locations across the country. 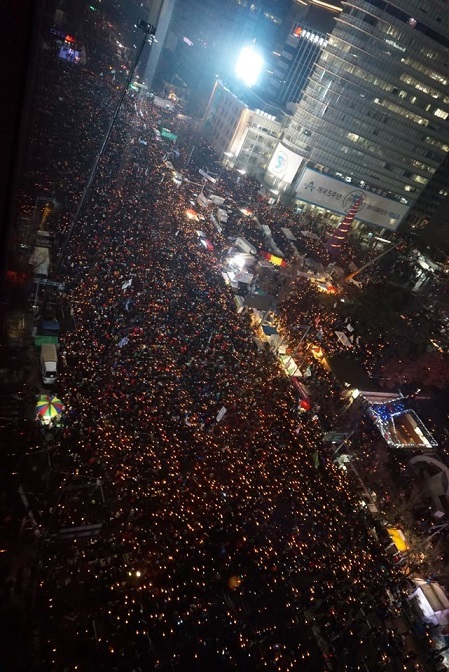 Organizers’ tally of participants in the Gwanghwamun rally surpassed 800,000 as of 6:30 p.m.

“I am so proud that I am raising my voice against President Park Geun-hye. We elected Park to represent us, not for her to abuse power," said Kang Geum-sook, 50, who came with her daughter.

The Gwanghwamun Square has turned into a river of candlelights and a massive outdoor concert venue with folk singer Ahn Chi-hwan performing. 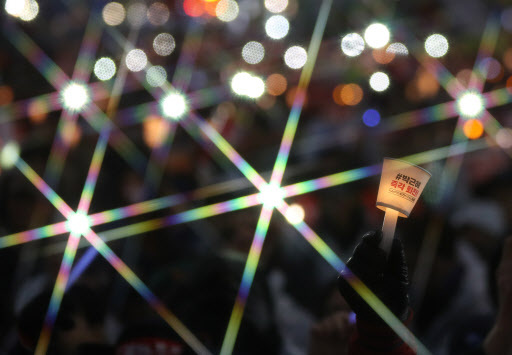 The sun has set and people are lighting up their candles. The eight-lane street of Sejongno is packed with protesters and more are flocking. Rally organizers say 600,000 have gathered. 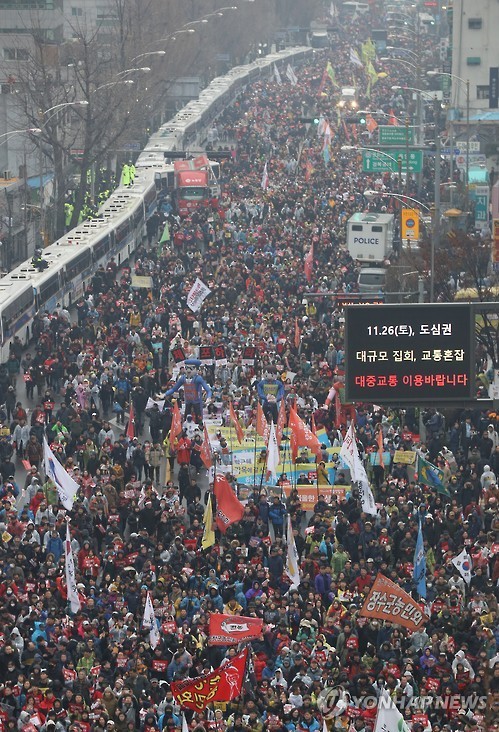 (Yonhap)
After chanting “Park Geun-hye, Resign” at a street just 200 meters away from the presidential office of Cheong Wa Dae, protesters are now moving back to Gwanghwamun Square for the main candlelight vigil to start at 6 p.m.
As of 5 p.m., rally organizers estimate 350,000 participants. 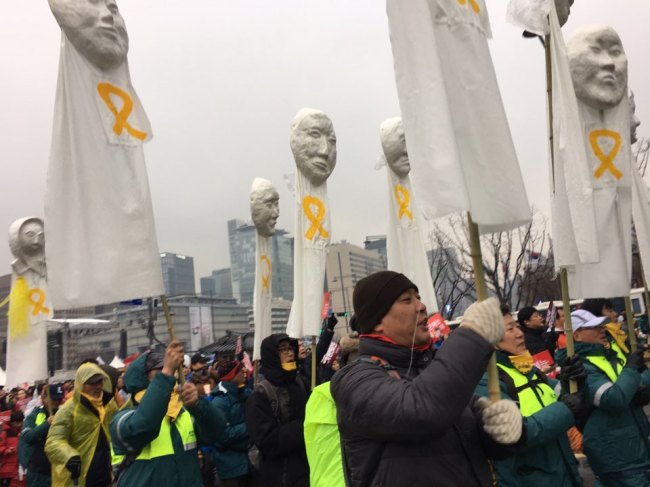 
Protesters start marching toward Cheong Wa Dae – the presidential palace. The snow has stopped, but the temperature is down to to zero. Despite the weather, the mood here is festive.

Jung Young-hoon, a 36-year-old father of two, said he travelled from Changwon to join the protest.

“It is difficult to take care of my children on the street during the rally, especially because of the weather, but it is peaceful, so it’s okay. I had to come to show them this is democracy. My children are young, but they will lead the future of this country.”

Protesters are to march as close as just 200 meters from Cheong Wa Dae – the closest that Korean authorities have ever allowed to any kind of protest. They plan to completely surround Park’s office and shout “Park Geun-hye, Resign!” 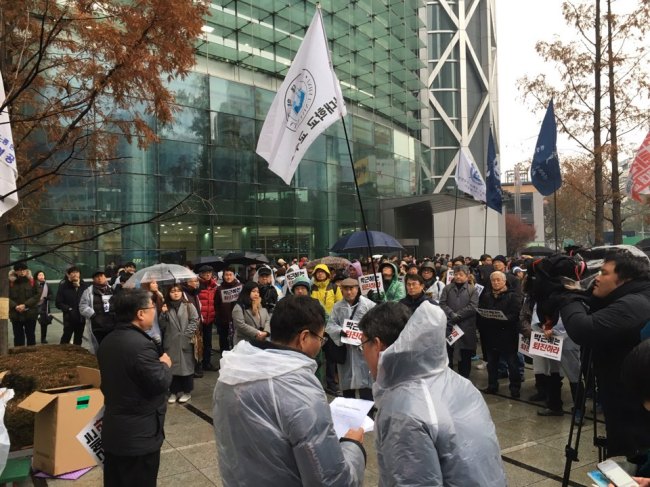 Professors for Democracy organized the rally for professors across the nation, who have until now only been taking part in protests as individuals.

“Adding professors’ voices to calls to oust President Park Geun-hye would help the general public significantly,” said Yoo Yong-tae, a history education professor at Seoul National University. “What causes this huge number of people to take to the street is that the president has been negligent of her duties and committed criminal acts.”

A group of SNU professors held the flag of the country’s most prestigious university in protest against the president.

The professors group will demand Park’s immediate resignation, the nomination of a new prime minister and the disbandment of the Saenuri Party, according to Yoon.

Yoo also said that the government’s push for revising history textbooks should be immediately scrapped, calling it “fake.”

He also criticized the closed-door agreement on the exchange of confidential military information between Korea and Japan. “The Park government has no authority to handle diplomatic issues now. It was an absurd agreement,” he said. 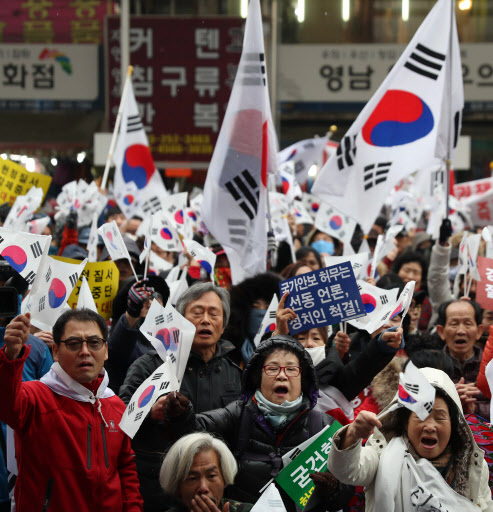 Pro-Park protesters wave the national flags at a rally in Daegu on Saturday afternoon. (Yonhap)


Staunch supporters of President Park Geun-hye rallied at Seoul and the southern city of Daegu from 1 p.m. to counter today’s anti-Park protests across the country.

Some 100 gathered at Seoul Station, while in Daegu, Park’s political home turf, about 400 – mostly senior citizens – showed up.

“I am here to protect President Park, who is innocent, from groundless accusations made by North Korean followers,” one of the participants said. 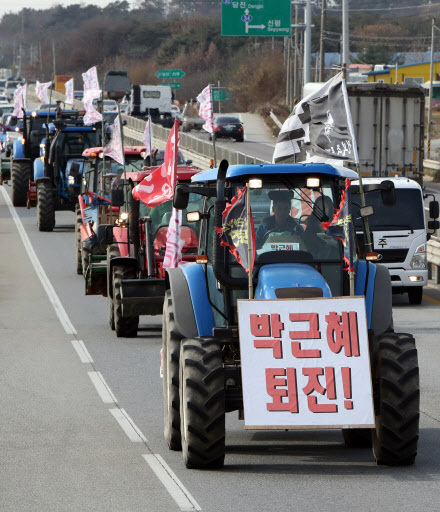 The Korea Peasants League drive their tractors toward Seoul from various parts of the country on Wednesday. (Yonhap)

The Korea Peasants League started a protest outside Seoul City Hall at 2 p.m. They were unable to take their tractors past the Yangjae Interchange in Southern Seoul and had to leave them in a side street before heading into central Seoul. The association had come to Seoul in various farming vehicles from different rural areas across the country, taking some of them more than 10 days to get to the capital in some cases.

Korea Peasants League Chairman Kim Young-ho criticized the government’s agricultural policies, including those concerning the rice market, but added that his association had broader concerns today.

“The government has exploited farmers and laborers for decades, divided the country into two and used the division for their political agenda. We are farming history now. We are not just here to talk about raising rice prices. We are writing, farming a new history,” he said. 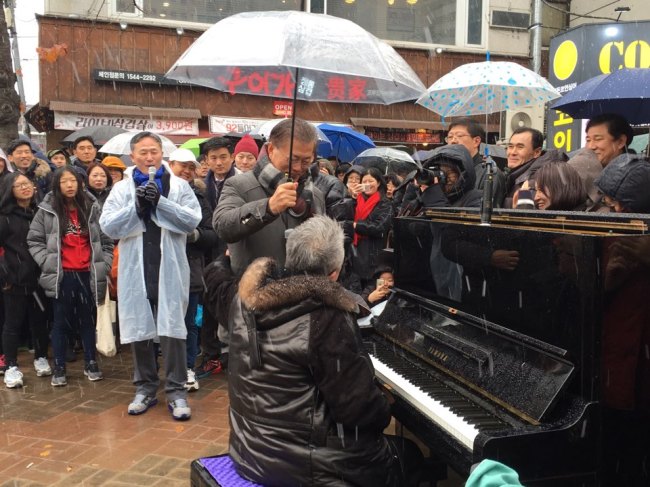 
Opposition politician and potential presidential candidate Moon Jae-in was in Hongdae just now, speaking at a piano concert organized as a precursor event to the main candlelight vigil in Gwanghwamun in the evening.

Between piano performances by composer Kim Hyeong-sok and citizens, he criticized President Park’s actions, saying she must be “on another planet” to be thinking the way she does.

“The president’s chief of staff said that the president is working from morning to night, so wherever she is, she is at her workplace," he said. “Is that acceptable? If she is playing golf, are the golf links her place of work? Even apart from the missing 7 hours on the day of the Sewol’s sinking, she has been absent from work many times.” 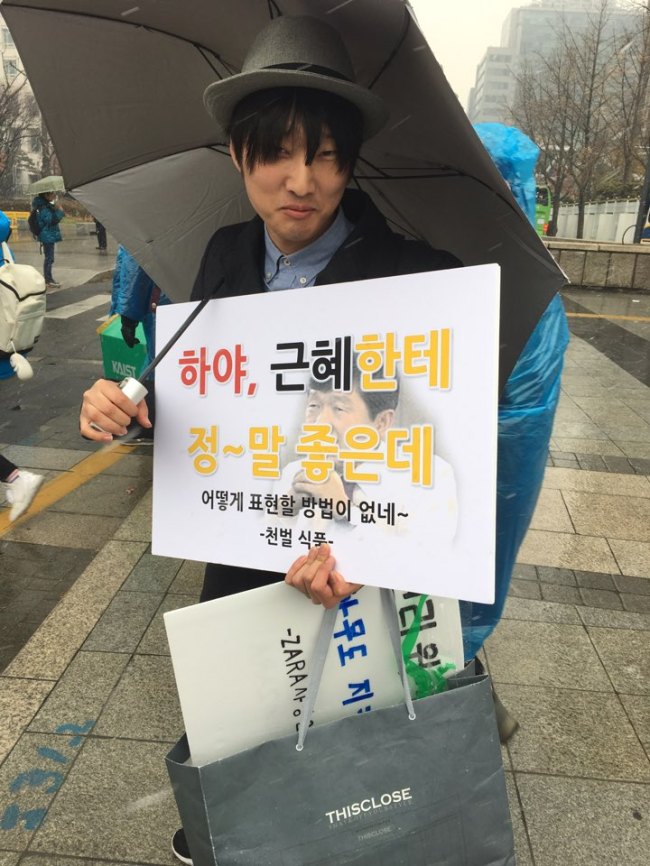 A protester shields against the sleet as he holds up an anti-Park Geun-hye placard. (Ock Hyun-joo/The Korea Herald)
People are gathering here and there at Gwanghwamun Square, but there are not many of them so far. All of them are wearing hats or raincoats and it is difficult to move about comfortably because of the weather.

It is sleeting now in central Seoul, which could have an impact on protest attendance. The weather is 2 degrees Celsius, with large flakes coming down fairly heavily. The snow is expected to continue until the evening, with the temperatures expected to remain largely the same.

Elsewhere, it is 5 degrees Celsius and raining in Gwangju and rain is expected later in other southern cities with protests planned, including Daegu and Busan. 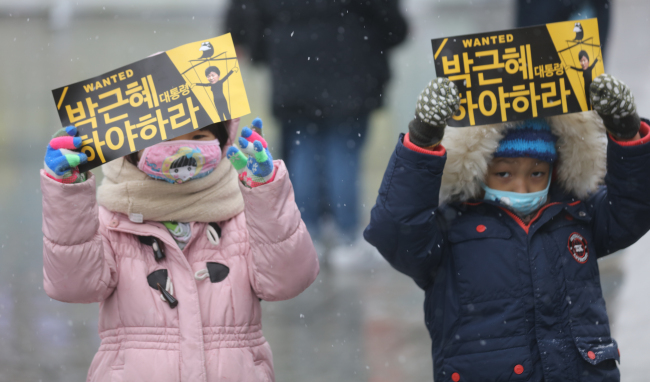 
Up to 2 million people are expected to protest across the country today to call on President Park Geun-hye to step down.

This is the fifth week of major protests against the president, which were sparked by revelations surrounding the president’s longtime friend Choi Soon-sil. Choi is alleged to have meddled in state affairs, used her connections to gain improper college admission for her daughter, and pressured companies into donating to funds which she is then suspected of using for her own personal gain.

Protest organizers expect 1.5 million people to gather in Seoul’s Gwanghwamun area and half a million more in other parts of the country.