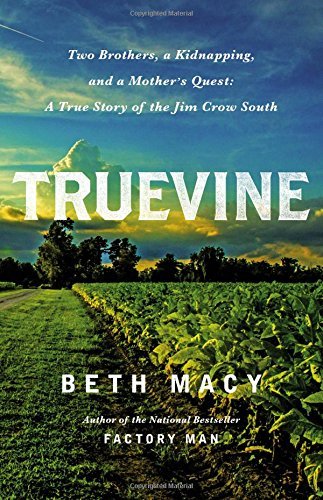 "Truevine: Two Brothers, a Kidnapping, and a Mother’s Quest: A True Story of the Jim Crow South”
By Beth Macy
Little, Brown and Company (432 pages, $28)
Beth Macy started hearing the stories back in 1989 -- as soon as she moved to Virginia to write feature stories for the Roanoke Times. Stories about the two black albino brothers kidnapped from the tobacco fields and sold into the circus. Warnings from parents issued as they dropped the kids off at the fair.

Macy, a journalist to the core, knew there was a story there. She just didn’t know she’d spend the next 25 years trying to tell it.

Eko and Iko, it turned out, where the circus names given to George and Willie Muse. When they were 9 and 6 years sold, they were whisked away from the fields and thrust into a new life as circus freaks. Not just any circus, either. They were a Ringling Brothers attraction, scarcely paid and badly exploited.

But that’s just the surface of “Truevine,” Macy’s exhaustively reported work of narrative nonfiction that was recently named a finalist for the prestigious Kirkus Prize.

You may find yourself wanting the tale of the Muse brothers to emerge as a simple tale of inhumanity and injustice. There’s a certain satisfaction in that. But the story is too thorny and complicated for that approach, and Macy, whose last book was the New York Times best-seller “Factory Man,” does us the favor of respecting that complexity. (TNS)
By Chris Vognar