The two-day hearing, which was supposed to analyze the root cause of the industry downturn and find solutions to the problem, already turned into a heated debate with the conservative and progressive lawmakers blaming each other over the latest fiasco following the fallout of Hanjin Shipping and scandal-ridden Daewoo Shipbuilding. 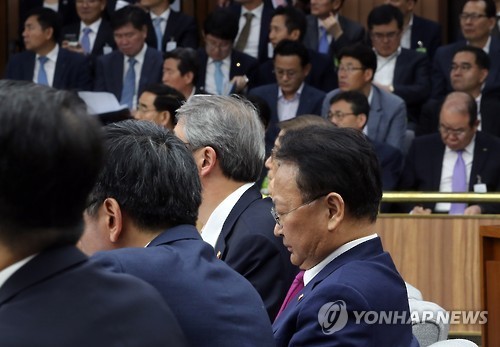 The Finance Ministry said that Daewoo Shipbuilding did not record its board meetings then, and that related agencies collected the minutes of the undisclosed state meetings on the financial matters of the shipbuilder, noting that it does not have the legal authority to demand them to submit those documents.

“But we came to a conclusion then that the company needed financial support.”

The minister also said that it was regretful to see business disruptions following Hanjin Shipping’s court protection filing, and that the government will do all it can to make sure the logistics sector continue operating as usual.

However, he reiterated that the government’s position over the matter remains the same, saying, “We will continue to deal with corporate restructuring by the book, and that it will not support (debt-laden) companies just because they are big conglomerates.”

This hearing comes as state-run policy banks including Korea Development Bank injected capital into Daewoo Shipbuilding even though it had accounting problems, with former KDB chairman Hong Ki-taek mentioning in the past that KDB had “no say” in the matter but just to follow the government’s decision.

The opposition party criticized Hong for not attending the hearing as a witness, with the conservative Saenuri Party firing back saying that it should refrain from making political attacks.

Yim Jong-yong, the chairman of the Financial Services Commission, said during the hearing that the regulator agreed to public criticism that its policy banks did not aggressively execute debt workout programs for insolvent companies.

“We believe policy banks were too soft on insolvent companies during the restructuring process,” Yim said, adding that they were being “too cautious” with restructuring.