Murder lurks deep in the mind 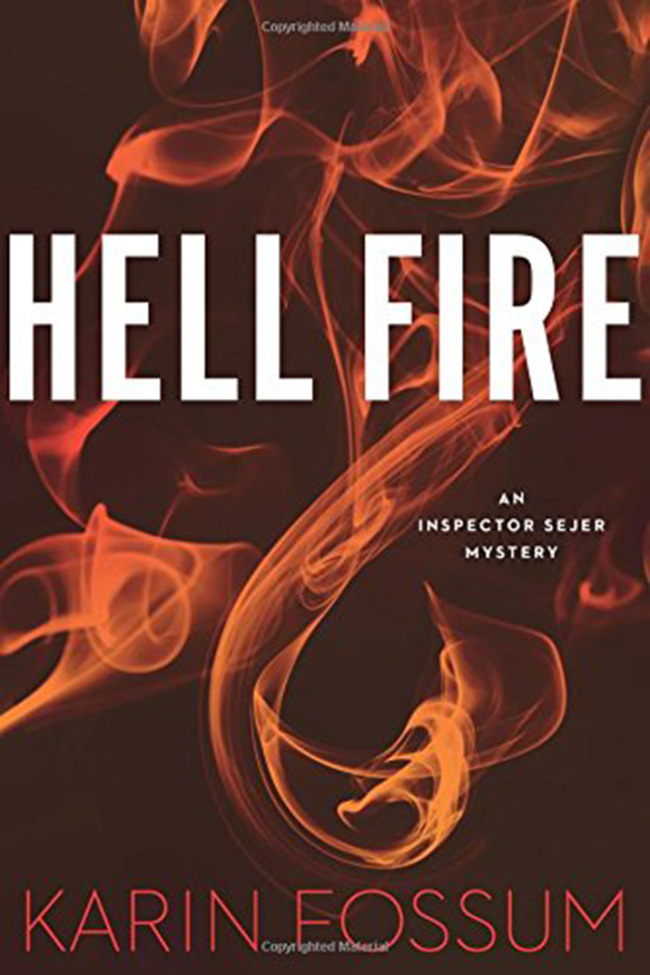 By Karin Fossum, translated from the Norwegian by Karl Dixon

Translated into dozens of languages and winner of the Glass Key Award for best Nordic crime novel, Fossum’s exceptional qualities are on view in her new novel, “Hell Fire,” the 12th to feature the inexorable Inspector Konrad Sejer, an investigator par excellence.

A brooding, fatalistic, truly disturbing book, “Hell Fire” starts, no surprise here, with the discovery of a corpse. Two corpses to be exact, in a dilapidated trailer parked in a field between the hamlets of Geirastadir and Haugane.

Young single mother Bonnie Hayden and her 5-year-old son, Simon, have been savagely killed by someone with a knife. “Planned, but still a bit chaotic” is how Sejer describes the attack to his investigative team. “This didn’t happen in the heat of the moment; this was intentional.”

“Hell Fire” goes back and forth between the present, with Sejer methodically talking to people and tracking down leads, to six months in the past, when Bonnie and Simon were alive and never in their wildest moments thinking that their story would figure in a crime narrative.

Bonnie is a home-care worker, and the variety of cases she is assigned offers readers, as Scandinavian crime writers as far back as Maj Sjowall and Per Wahloo (creators of the landmark Martin Beck series) have done, windows into the nature of society.

By all indications Bonnie was a genuinely good person (“kindness itself,” according to a friend) who did all she could for her clients. And her son was an adorable tot who never quite got used to his mother having to put him in day care to go to work.

Fossum not only switches back and forth in time, she also introduces us to another single mother and the son she lives with. That would be Thomasine “Mass” Malthe and her 21-year-old son, Eddie, a young man with an undefined personality disorder obsessed with tracking down his absent father, something his mother is dead-set against.

Though figuring out who killed Bonnie and Simon is very much on Inspector Sejer’s mind, it is not necessarily the top concern of author Fossum, a master of creating disturbances in the minds of her readers.

Fossum’s books are invariably involving novels simply masquerading as crime fiction, literary works with murder on their minds. For her, the great question is not who did the crime but why was it done. To Fossum, human relationships, the endlessly complexities of individual psyches, are the great mystery to be pondered.

A writer whose first published works were volumes of poetry, Fossum has the pared-back style to make this happen. Her tone is exact and unflinching, the bitter enemy of anything extraneous or false. Here, for example, is an example of Sejer’s stream-of-consciousness thinking when he discovers a key clue:

“Who did it belong to? A furious or raving lunatic, a man who had been wronged in some way, a man whose head was full of revenge or delusions. A man who perhaps heard voices, a man who was out of his head on something. A man who was full of demons and fiends, a man who might not even be able to explain to himself, let alone to anyone else, why he did what he did. A man who drove a red car and had left a footprint on the worn linoleum floor and then fled through the woods.”

Because Fossum is the kind of writer she is, what grips readers is the enormous amount of emotion she works up as we get closer and closer to reliving the murderous event in question.

Like her best book, “The Indian Bride” (shortlisted for the CWA Gold Dagger in 2000), “Hell Fire” is close to heartbreaking, and there are not many novels, thrillers or otherwise, you can say that about. (TNS)