According to Sunchang Police on Sunday, a 50-year-old male driver was accused of driving downtown of Sunchang, North Jeolla Province, with his pet attached to the back of his sedan by a leash. It was killed by being dragged to death along the road Saturday, police confirmed.

Animal rights group CARE made the police report with footage of the incident, asserting that there is plausible cause to believe the driver had intentionally let his dog be dragged by his vehicle.


The driver, whose identity has not yet been revealed, insisted it was an “accident,” police said.

The driver said after visiting a grave of a family member -- as is custom in line with the upcoming Chuseok, or Korean thanksgiving -- he had put two Jindo puppies inside his car’s trunk with their leashes hooked inside it. He said he had not thought that the dogs could fall out of the car even though he had been aware that the trunk was partly open due to bulky equipment he had used to trim the grass on the tomb. 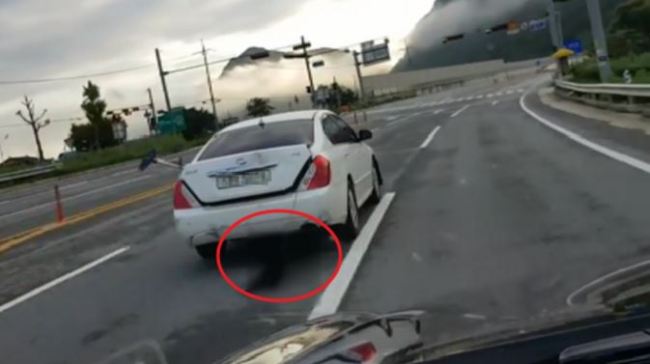 As the vehicle sped up, one of the puppies had jumped out of the trunk and was then dragged to death along the road for about 4 kilometers at the speed of 80 kilometers per hour, the police explained.

The police said they will take the driver in for further investigation.