A local court ruled on Friday that swimmer Park Tae-hwan is eligible to compete at the Rio de Janeiro Summer Games, a significant victory for the beleaguered athlete in his legal battle with the national Olympic body.

The Seoul Eastern District Court accepted an injunction requested last month by the swimmer to confirm that the Korean Olympic Committee (KOC) has no reason to ban him from racing for South Korea at the Olympics. 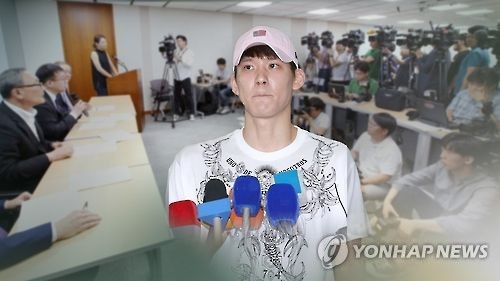 Park "has no reason for being disqualified based on Article 5 of the Korea Swimming Federation's rule on the selection of national team swimmers," the court said in its verdict.

The court also said he is eligible to make the national team.

Park, the 2008 Olympic gold medalist in the 400m freestyle, was suspended for 18 months by FINA, the international swimming governing body, after testing positive for testosterone in October 2014.

The ban ended in March this year, but the KOC banned him from the team based on its rule preventing athletes from representing the country for three years after the end of a doping suspension.

Park was not named to the preliminary national swimming roster announced on May 11.

Park has also taken his case to the Court of Arbitration for Sport (CAS), the top sports tribunal. The CAS said Wednesday Park has requested an urgent ruling by July 8, which -- if the CAS rules in favor of Park -- would allow him to compete in Rio. The deadline to submit the final swimming roster is July 18.

The Seoul court said the KOC was unfairly punishing Park twice for the same offense, and such double punishment ran counter to the code set by the World Anti-Doping Agency (WADA).

The court thus sided with other critics of the rule, who have pointed out that double punishment has already been ruled invalid.

In 2011, the CAS handed down a decision against the International Olympic Committee's "Osaka Rule," which barred athletes who had served a doping suspension for at least half a year from competing in the following Olympics. The CAS said the Osaka Rule, adopted in 2008, was "a violation of the IOC's own statute and is therefore invalid and unenforceable."

Lim Sung-woo, Park's attorney, said the court recognized the swimmer's national team status regardless of the CAS ruling, and added he expects the CAS to also rule in his client's favor.

Park's legal representatives and the KOC have had different opinions on whether a CAS decision should be legally binding. At a May conference on sports arbitration in Seoul, William Sternheimer, deputy secretary general of the CAS, said the tribunal is "not responsible for the enforcement" of its rulings, but that the losing parties have complied with the rulings "in about 90 percent of the cases."

Cho Young-ho, secretary general of the KOC, said he would respect the court's ruling and would take steps as necessary following the CAS decision.

Another KOC official, who requested anonymity, said it was possible the Olympic body could still appeal Friday's ruling.

"It's not clear if the court ordered us to let Park compete at the Olympics right away or to wait until the CAS makes its ruling before making that decision," the official said. "If the CAS rules in favor of Park, then we could say he'd be qualified to swim at the Olympics."

A month after the ban ended in March this year, Park raced in the Olympic trials and came inside qualifying times for the Rio Olympics in four freestyle races -- 100m, 200m, 400m and 1,500m.

Then on Friday Park made his first international appearance since the ban at the Swimming Australia Grand Prix in Brisbane. He finished third in the 400m freestyle in 3:49.18, about five seconds slower than his time at the national team trials.

Park finished ninth among 10 swimmers in the 100m final with a time of 51.29 seconds, more than two seconds worse than the time in April here.

He has been training in Australia since early June. (Yonhap)