The private sector debt, excluding credit card spending, tallied at 569.3 trillion won ($482.5 billion) at end-March, and loans by local banks accounted for 49.1 percent of the total, the Bank of Korea (BOK) said. 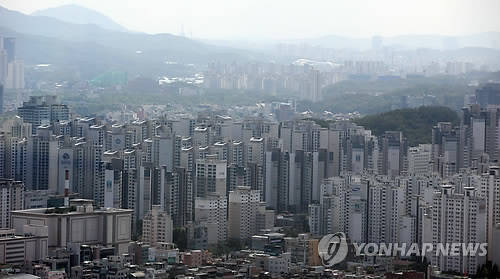 It is the lowest since the fourth quarter of 2002 when the central bank first released the household debt data.

The government toughened mortgage loan screening in February on rising concerns over the fast-rising household debt, prompting low-income families and those with bad credit to make a detour to nonbanking lenders.

The federation of savings banks held 15.2 trillion won of deposits at end-March, accounting for 1.3 percent of household debt. It was the highest level since 2006.

The deposit at credit unions tallied at a record 32.5 trillion won in March, taking up 2.8 percent of the total.

The growing dependence on nonbanking lenders has raised concerns over the rising financial burden on households as they usually charge higher interest rates than commercial banks.

In response, financial regulators vowed to apply stricter lending rules in the nonbanking sector starting in the second half of the year to keep the rising household debt in check. (Yonhap)