Since then, it has been opening doors for foreigners’ start-ups as part of its creative economy drive to foster the “Korean Silicon Valley” as the next Asian tech hub.

The government vowed to do away with the stifling capital investment and other difficult requirements, establishing a D-8-4 start-up visa in October 2013 to rival programs in Canada and the U.S.

Tech industry experts here have praised the start-up visa and say it signals that the government is growing more attentive to such issues. 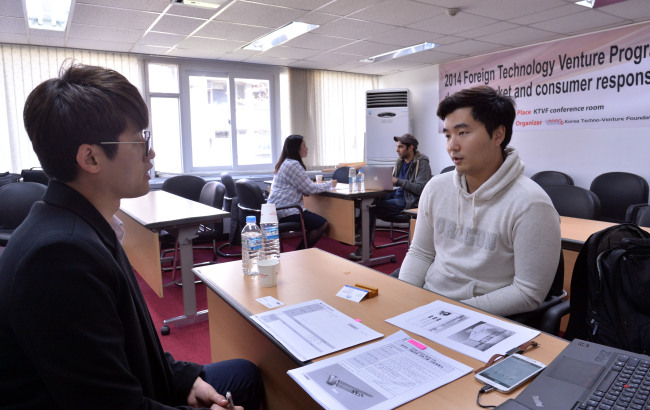 Participants of the young program hail OASIS’ benefits: incubation, coaching, networks, easy access to local experts in their field and even credibility among Korean businesspeople as becoming a de facto government-approved entrepreneur. Most of all, the program helps them wade through the murky labyrinth of setting up a company in Korea.

“There are so many foreigners who have amazing ideas. … And as soon as they begin that process (of starting up), there’s a massive amount of red tape,” said Jeet Dhindsa, graduate of the OASIS program and founder of My Seoul Secret, a medical tourism liaison. “So I think that the biggest asset that they provide is knowledge, how to navigate this process.”

But participants and government officials themselves point out that despite the program’s earnest intentions, it exposes layers of inter-agency infighting, excessive bureaucracy and lack of synergy, which they say is widespread in the government’s nascent start-up support for both foreigners and Koreans.

Inefficiency, overlap and rivalry are seen across government efforts to support the start-up scene, as many government bodies have their own programs that are very similar to each other, but don’t often cross-promote.

Industry sources point to redundancies particularly between the Ministry of Science, ICT and Future Planning and the Small and Medium Business Association competing with the same programs, including overseas field trips for Korean start-ups. And as different agencies create similar programs, their performance is weighed against the competition.

“Ideally you would picture this umbrella. Sometimes they do collaborate, and they sync certain things up, but sometimes they can be almost competitive with each other,” said Dhindsa, adding that entrepreneurs must navigate between agencies that provide different pieces of the puzzle to establish a company, with basic information hard to access.

“Each one of them might have a piece of that puzzle, and sometimes they’re not sharing information, or sometimes it’s not centralized.”

Dhindsa, an American, believes Korean culture fuels a knee-jerk reaction to initially view operators of similar projects as competitors instead of collaborators.

“Sometimes I think that they are disjointed if they perceive their respective programs as competition, but I think if they just change the dialogue, maybe we can just make one program and work together somehow.”

OASIS’ very creation reflected a case of this competition. According to Choi Hong-seok, an assistant manager handling business programs at the Seoul Global Center, a comprehensive foreign resident assistance agency run by Seoul City, the SMBA pitched its idea for the start-up visa curriculum to the Ministry of Justice last year with a carbon-copy plan of the existing business coaching program that Seoul Global Center had been running since 2009, instead of proposing a collaborative program from the start.

The SMBA attempted to carry out the curriculum singlehandedly, but buckled under its inexperience in dealing with expat issues, Choi said. It then joined hands with the Korea Invention Promotion Association, Korea Institute of Science and Technology and the Seoul Global Center to split up the responsibilities. But since the agencies split the roles, with each handling respective classes, the program lacks a central go-to authority, and entrepreneurs say this increases confusion. 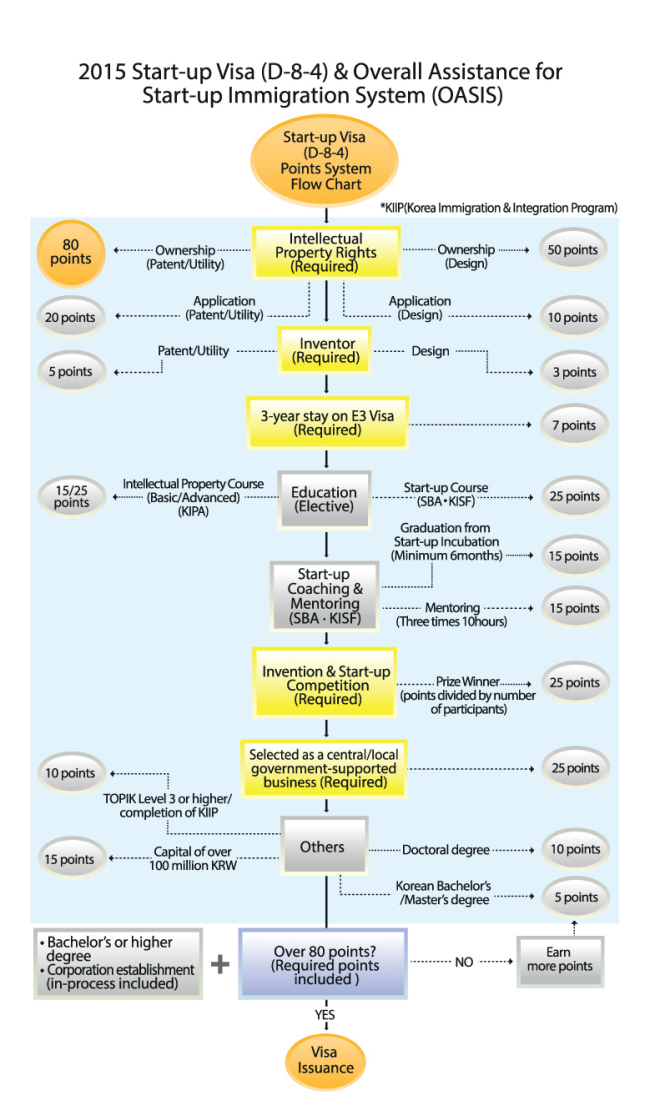 This flow chart featured in the OASIS brochure for 2015 explains the point system for earning a D-8-4 start-up visa. (OASIS)

American David Suh, chief financial officer for wearable-maker Zikto, said the four public institutions his start-up has worked with would initially try to collaborate with each other ― at least, until they needed something to show for their efforts.

“If it hits the end of the year, they need some kind of result, so they request the results from the companies that they have supported,” he said. “One disadvantage with getting involved with different government institutions is … who’s going to take the credit?”

At the same time, some agencies try to overly control the start-up ecosystem or even compete with the private sector, said a former manager of a government-run start-up support program.

He recalled being shocked when a longtime ministry official with no business experience was assuring entrepreneurs that because they were inexperienced, the government was there to teach them.

“The government should support, not actually directly control the system,” he said, noting that state-run agencies tended to create their own business programs rather than supporting private sector experts to carry them out. “Obviously they don’t want to compete with the private sector, but they don’t even care whether they’re competing or not.”

He said this is fueled as success shines up the management’s reputation and clinches more funding for the agency.

Poor communication between agencies prevents systemic problems from being solved effectively, and other issues like fear of a public backlash and lack of political will are stalling aggressive improvements, the former manager added.

Namely, industry experts widely suspect that the government is reluctant to expand funding in fear of criticism of using public money to help foreign nationals in a time of economic drought. Public agencies say they are cautiously but surely considering how to expand the support, but most grants and programs are still not available to expats.

“The core problem is that (government agencies) aren’t allowed to use the government budget to support foreigners. Unless this problem is solved, then I don’t know what they could do,” he said.

OASIS participants nonetheless look on the bright side and see program officials being receptive for improvement.

“They’re kind of figuring things out, making mistakes, readjusting,” said Dhindsa. While being part of that beta group was an emotional roller coaster full of bureaucratic twists and growing pains, he said program officials were laying the foundation to give future participants a smoother ride.

He suggested that they take a lesson from their subjects and act like a start-up ― nimble and collaborative, rather than parental or unilateral ― in order to adjust quickly.

“The format and delivery is delivered sometimes in a really one-way conversation,” Dhindsa said. “There needs to be a feedback loop so (program planners) can adjust themselves. … If they create more of a collaborative, two-way communication structure, that’s where we learn a lot.”

After a year and a half of set-up, classes, mentoring and wading through red tape, Dhindsa obtained his D-8-4 visa last month. The Ministry of Justice’s latest data put the number of D-8-4 visa holders at just six since October 2013, but OASIS program officials expect the number to grow quickly this year.

With the assistance received in networking, mentoring and grant applications, he is now flying solo.

“Going through the OASIS program really tests your perseverance to chase down your dream because there will be so many cultural and procedural setbacks that will make you want to quit,” he said. “Aside from the funding, education and mentoring, I think the unintentional benefit of the program is that it actually makes you a mentally stronger entrepreneur in Korea.”

OASIS officials, for their part, said they are tweaking their curriculum based on feedback, extending collaboration to include the Korea Immigration Service Foundation and boosting the number of start-up training courses to spread to Gangwon Province, Daejeon, Busan and other regions. Starting this year, the Gwangju Institute of Science and Technology is hosting a comprehensive OASIS curriculum for aspiring entrepreneurs in the southern region.

The official OASIS website is at oasisvisa.kr, which currently redirects to the Hi Korea e-government for foreigners homepage and is not yet updated with the latest information. The Korea Invention Promotion Association provides relevant information in Korean, English and Chinese at www.ipcampus.kr/oasis-visa and posts announcements on Facebook at www.facebook.com/oasiskipa, while the SMBA publishes at startup.go.kr in Korean only.

This is the fourth article in a series on foreigners working in Korea’s technology start-up ecosystem. Sang Youn-joo and Stephanie McDonald contributed to this report. ― Ed.