By Korea Herald
Published : Aug 13, 2014 - 21:08       Updated : Aug 13, 2014 - 21:08
The global automobile market is worth 2,000 trillion won ($1.9 trillion), which is three times larger than South Korea’s annual total exports. Although cars emerged as the greatest invention of the 19th century, they have become the greatest culprit behind energy waste and environmental degradation in the 21st century. Oil reserves that are economically feasible to drill for are being depleted at a rapid pace, while air pollution from car exhausts has reached intolerable levels. This has led to the development of eco-friendly vehicles. Though clean diesel engines and high fuel efficiency engines are attractive alternatives, merely improving conventional engines is not enough to solve the fundamental problems. Cars that run on bio fuel and hydrogen are also in the works, but their high costs and daunting task of building fuel supply infrastructure to accommodate them are hindering their development.

For these reasons, various types of electric cars are gaining popularity all over the world as the next generation of eco-friendly vehicles. Hybrid electric vehicles, which are quickly gaining a foothold in the global automobile market, have a small battery and a motor built into their internal combustion engines. This allows HEVs to store electricity when stationary. Also, the engine runs at optimum efficiency, which improves mileage and reduces gas exhaust. Add a charger and a bigger battery, and you have plug-in hybrid electric vehicles (PHEVs), which are “true” electric cars. These cars cover approximately 50 km on a battery, and when the battery runs out they convert to gasoline. As of now, they are considered to be the most practical type of electric car. The next step is battery electric vehicles, which do not have an internal combustion engine but run purely on a large-capacity battery, charger, and generator. These vehicles have the simplest structure and produce no exhaust fumes, which makes them the most desirable type of electric car. But why is it that they are not popular?

BEVs do not produce noise, are not prone to breakdowns and the running cost is only one-fifth that of gasoline cars of the same level. However, the problem is that the battery is too heavy and expensive. Also, 80 percent of the world’s lithium, the primary ingredient for batteries, is buried in Bolivia. In addition, batteries tend to last for only 50 to 200 km at a time, which means that the driver needs to recharge batteries very frequently. The fact that the recharging process takes around 30 minutes makes the entire task more tedious. Furthermore, this means that the number of charging stations we need across the country is much higher than the number of conventional gas stations that we have now. In addition, frequent recharging eats away at battery life, just like what happens with cellphone batteries. This means that the driver must regularly replace the batteries, which is an additional financial burden.

With all these challenges, it is no surprise that the electric car was commercialized in 1828, 58 years prior to gasoline cars, only to be pushed out of the market due to battery costs and recharging problems. However, this should not undermine the capacity (acceleration, horsepower, mileage) of electric cars. After all, the fastest sports cars in the world for the past 100 years have been electric cars, which attests to the capacity of the eco-friendly vehicles.

The key to the electric car’s commercial success is innovation in battery development, which is why major South Korean companies such as Samsung SDI and LG Chem are at the forefront of global efforts to develop high-capacity batteries for electric cars. Thanks to such research, battery life is doubled while battery price, weight and charging time are halved every 10 years. These developments have contributed to the rising popularity of electric cars. Although the worldwide sale of electric vehicles is only 1 percent of total car sales, the market has shown an astonishing annual growth rate of 30 percent. In Japan and Norway, the market share has already reached about 10 percent. 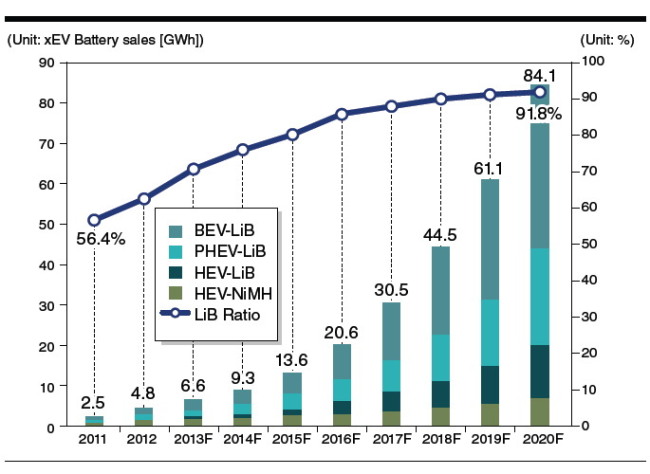 However, it is expected that it will take about 10 years or more for electric vehicles to offer economic feasibility and convenience at a level on par with gasoline cars. This is a difficult task because while gasoline stores energy at the molecular level, batteries store energy at the nano level, which means the volume and weight of a battery must be dozens of times greater than a given volume of gasoline to provide the same amount of energy. To reduce the recharging time to match the amount of time refueling takes at a conventional gas station, which is two minutes, the recharger’s power capacity must be as large as 1 MW, which also presents significant technical difficulties. Such high-capacity chargers will cost tens of millions of won each.

To solve these problems, a battery replaceable electric vehicle, which allows the driver to charge a spare in advance, was introduced a few years ago. However, the battery cost became at least twice as much as the conventional electric car batteries due to the spare battery. Also, a battery replacement robot system is expensive and delicate, so the vehicle is now all but off the market. How can we make batteries more efficient, and how do we solve the recharging problem?

Wireless charging technology is currently used in small appliances such as electronic toothbrushes and smartphones. Although the batteries in these appliances have very small capacity, this does not present an energy shortage problem thanks to constant recharging. The same principles are applied to the roadway powered electric vehicles, which have batteries that are only one-fifth the size of those conventional electric cars, but are constantly charged by underground electric power strips through wireless energy transfer. Korea Advanced Institute of Science and Technology introduced the on-line electric vehicle (OLEV), which has fairly high efficiency (83 percent), the biggest surface-to-charger gap (20 cm), and the lowest infrastructure cost (400 million won per km). The innovative vehicle earned a place on Time’s “50 Best Inventions of 2010” list. Also, the World Economic Forum’s Global Agenda Council awarded the technology with the top spot on its annual Top 10 Emerging Technologies list in 2013, cementing KAIST’s position as the standard bearer of the field. OLEV completed its test runs at Seoul Grand Park, Expo 2012 Yeosu Korea, and KAIST’s main campus, and was commercialized in Gumi, North Gyeongsang Province, for the first time.

Meanwhile, Qualcomm, a global communications chipmaker, has launched a project to develop a stationary wireless charging system, another type of wireless electric car technology. This is aimed at the market for PHEV and BEV, which are quickly gaining popularity. Wireless recharging vehicles have advantages that far outstrip conventional electric cars. There is no need to plug in heavy cables to recharge the car, no danger of electrocution and, better yet, the car is recharged automatically when it is parked.

The efficiency and price of the recharging mechanism have been major obstacles, but these days efficiency has reached 97 percent and the cost has fallen close to that of conventional electric cars, making the new technology very competitive. Just two years ago, conventional high-speed rechargers were being developed in dozens of places around the world. This year, however, wireless recharging technology was the most prominent topic of debate at 2014 EVTeC in Japan, an international conference focusing on electric vehicles and related technologies.

Wireless electric cars, whether the technology is used to recharge parked cars or cars being driven, will facilitate the commercialization of electric cars. The technology is already the most promising solution, and it is expected to grow even more popular as battery capacity and price competitiveness improve. With this in mind, the government needs to update its policies.

Second, the government should increase the number of public OLEV buses, which are clearly more economical than traditional public buses. Also, it should encourage further research to apply roadway wireless recharging technology to light rail transits, regular cars, and trucks.

Third, instead of paying subsidies for electric car purchases, the government should provide free recharging services and other incentives that encourage the further utilization of electric cars, not just purchases. These changes would bring real and sensible results.

Furthermore, our road system itself is optimized only for construction. However, the times call for a smart road system that incorporates IT technology to enable driverless driving, wireless charging and safer driving. The biggest advantage of smart roads is that since they do not require land compensation, the construction budget is greatly reduced. The cars of the future will be based on IT. I hope that with wireless electric cars, South Korea will become the leader of the digital nomad era.

By Rim Chun-taek
KAIST professor of nuclear and quantum engineering