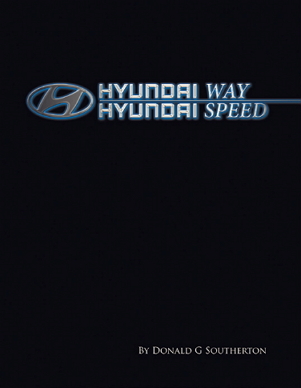 “Speed” is the key to explaining Hyundai Motor Group’s stunning growth over the past decade. The rapid decision-making under the charismatic leadership of chairman Chung Mong-koo has been crucial for its global expansion.

But Don Southerton, author of the recent book “Hyundai Way: Hyundai Speed,” says a more cross-cultural approach is now needed for the Korean auto giant to keep going at its current speed.

He recalled a 2005 training session he held at Hyundai Motor’s newest plant in Montgomery, Alabama, where tensions were mounting between the American and Korean teams ahead of the production of their first vehicles at the facility.

“The problem was ‘cultural’ ― Koreans not understanding and Americans vice versa,” Southerton, who is also leading a Denver-based consulting firm, Bridging Cultural Worldwide, wrote in an email interview with The Korea Herald.

According to him, many of the new American managers had been searching in earnest for the “Hyundai Way” ― documented policies and procedures that would guide them in decision-making and day-to-day work.

But not finding a set “Hyundai Way” resulted in some Americans feeling that there might be a communication and language issue. “More concerning, a few hinted strongly at trust issues and that Koreans were deliberately withholding vital information,” he said.

He wouldn’t say this cultural issue was limited to Hyundai. Other multinational companies like Coca-Cola and IBM that have a long history of dispatching expatriates worldwide have always experienced such difficulties.

“But unlike American companies like Ford, GM and Chrysler that have highly standardized and documented policies and procedures, at Hyundai these were acquired on the job and over time, shared informally through mentoring,” he said.

He pointed out even some Korean employees experience this issue.

“In the past … an employee joined the group as their first job and moved up through the ranks. Today, greater numbers of Korean team members are joining the group after years of employment with other firms. Like Westerners, it takes time for them,” he said.

“As more and more Hyundai operations and sales have shifted globally, the need to localize to each market has been crucial. I feel Hyundai is constantly evaluating what works best for each market. In some markets leadership is Korean, in others leadership is local.”

He suggested that what works best is when both the Korean and local leadership are strong collaborators. As for the hiring of non-Koreans for local leadership roles, like in any international operation, or in the case of Peter Schreyer, the group’s design chief, the decision would be based on the individual’s experience and reputation.

“I also feel one management change occurring is a shift from the top-down management to one of collaboration,” he said of the ongoing leadership transition from the current chairman to his son Eui-sun, the vice chairman.