By Seo Jee-yeon
Published : Apr 29, 2014 - 20:17       Updated : Apr 29, 2014 - 20:22
Korean food is gaining popularity abroad and is acclaimed for being healthy, but there is a definite need to nurture high-end Korean culture and related products if the country really wants to globalize its food, according to a CEO who has devoted his life to promoting premium ceramics and liquor and enhancing Korean food culture.

“Embracing the upscale parts can bring diversity and dynamicity to the culture, which is an essential factor to attract foreigners seeking something new,’’ Cho Tae-kwon, CEO of Kwangjuyo Group, said in a recent interview with The Korea Herald.
Kwangjuyo was established in 1963 to preserve the art of traditional Korean ceramic-making. It has gone from being a traditional ceramics company to a trendsetter and at the same time a guardian of Korean dining culture since 1988, when Cho inherited the leadership from his father, who established the company.

As part of his endeavors to rediscover Korean haute cuisine, Cho established Gaon, an A-list Korean course meal restaurant in the well-off neighborhood of Cheongdam-dong, southern Seoul, in 2002. He also created the “Hwayo Manchan (Tuesday feast),” inviting opinion and business leaders as well as artists to his house in Seongbuk-dong, northern Seoul, and introducing not only slow-cooked foods but also luxurious Korean dishes to thousands of people who later became avid hansik (Korean food) fans.

“I respect (the fact) that Korean foods are what people eat in their everyday lives and they may feel like they know the food too well. But why pay 25,000 won ($24) for pasta and not for any Korean food? I want to change that very notion,” he said.

Cho has been searching for Korean foods other than sam gyeopsal (pork belly), kimchi broth, samgyetang (chicken broth) and bulgogi, which have all been perceived as typical Korean foods.

“There is a unique, humble but at the same time haute cuisine inherited from the aristocrats. But not many people know about it because, at first, noblemen thought it wasn’t appropriate to flaunt their wealth and status, and then during the Japanese colonial rule (1910-1945), we were forced to let it go,” Cho said. This is the area that Cho is devoted to rediscovering and promoting. 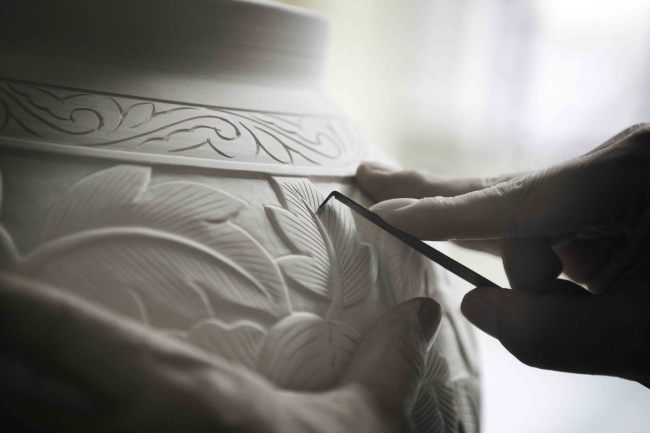 Cho has also been fighting against low-end meal bowls that people use at home. Kwangjuyo has recently widened its range and has started selling affordable tableware with modern designs. He believes that this will allow people wider access to good home meals.

Cho’s efforts are finally paying off. Kwangjuyo tableware and Hwayo, the firm’s premium soju brand, have won awards at domestic and international events, and their sales have been increasing steadily.

“I expect that more than a million people will be able to appreciate our goods by 2020. I hope they buy a bottle of our spirits every month ― Hwayo is now served at every major restaurant in Seoul ― which translates to more than 120 billion won in annual sales,” he said.
“And I am planning to open 500 more high-end restaurants named Bicena ― small or large ― across the country by 2030.”

They have become a hot spot among people seeking a glimpse into the traditional yet eclectic side of Korean cuisine.

Bicena also serves as the frontline in Cho’s dream to create a “table culture” business empire. “I hope Bicena can become a good franchise for retirees interested in high-end Korean cuisine. Then Kwangjuyo will lease the tableware,” he said.

“In all, I am dreaming of a world in which things are appreciated for their quality and diversity, including high-end (products), (and in which) Korean culture is respected and paid (for) at the right price,” he said.