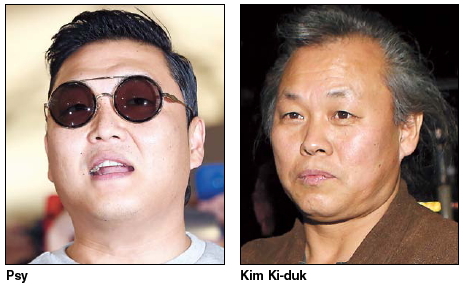 Psy, the popular singer-rapper behind “Gangnam Style,” has been named to receive a state order of cultural merit this year, along with nine other winners, the cultural ministry said Tuesday.

He topped the coveted British Official Singles Chart and ranked second on the U.S. Billboard’s Hot 100 Chart with the track. The video currently sits on No. 2 on YouTube’s all-time list of most-watched videos, next to Justin Bieber’s “Baby.”

Psy will receive the Okgwan Order of Cultural Merit, the fourth-highest honor out of five, for his contribution to increasing the world’s awareness of Korean pop music and ensuing interest in Korea, the ministry said in a press release.

The 2012 list of medal winners also includes the director and stars of “Pieta,” winner of the Golden Lion for best film at this year’s Venice Film Festival, according to the ministry.

Director Kim Ki-duk will receive the Eungwan Order of Cultural Merit, the second highest, while the film’s male and female leads, Lee Jung-jin and Jo Min-su will get the same honor as Psy, it said.

The awards ceremony will be held on Nov. 19, the ministry said. (Yonhap News)