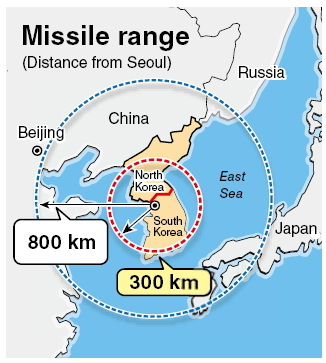 Seoul and Washington have provisionally agreed to revise their bilateral pact to allow South Korea to develop ballistic missiles with a range of up to 800 kilometers, up from the current 300 km, reports said Sunday.

The weight of the payload is expected to remain at the current 500 kg. The allies are fine-tuning details and likely to announce the result of their negotiations next month, the reports said.

Seoul’s Foreign Ministry said, “Nothing has been confirmed yet, and the negotiations are still ongoing.”

Since early last year, the two sides have been engaged in official negotiations over amending the pact signed in 1979 and revised in 2001, with Seoul strongly calling for the revision to better deal with threats from North Korea’s long-range missiles.

Washington has apparently been reluctant to alter the pact as it could undermine its initiatives of non-proliferation and arms control, and could provoke neighboring states such as China, Russia and Japan, not to mention the North.

“(The two sides) have reached an agreement on major issues (concerning the revision),” a Seoul official was quoted as saying by Yonhap News.

As Pyongyang has continued to test its increasingly sophisticated missiles under the disguise of satellite launches, Seoul has long demanded that the range be extended to longer than 1000 km to put all core military targets in the North within striking range.

In April, the communist state launched a long-range missile, claiming again that the launch aimed to put a scientific satellite into orbit. Experts say that it was a test of the Taepodong-2 missile, the longest-range North Korean missile under development.

The Taepodong-2 missile is presumed to have a range of more than 6,700 km, enough to hit parts of Alaska, but still short of reaching the U.S. mainland. The missile’s tests have so far failed.

The longest-range North Korean ballistic missile, deployed since 2007, is the Musudan missile with a range of 3,000-4,000 km. This missile, in theory, brings Guam, a key U.S. strategic base in the Asia-Pacific region, within its range.

The allies’ agreement on the revision is expected to ease the limits of the range and payload, which the bilateral pact imposes on Seoul’s acquisition of unmanned aerial vehicles.

It has also sought to acquire an unmanned surveillance plane such as the Global Hawk spy drone so as to enhance intelligence capabilities to better monitor North Korean military movements, ahead of Seoul’s retaking of wartime operational control from Washington in December 2015.

During the last negotiation phase, Cheong Wa Dae is said to have led a key role in pushing for the range extension.

Kim Tae-hyo, former senior presidential secretary for external strategy, had been at the center of the efforts. He stepped down in July amid public discontent over the government’s push for an envisioned Seoul-Tokyo military intelligence-sharing deal.

Kim, who was caught visiting Washington earlier this month, was rumored to have led the negotiations as a special missile envoy even after his resignation.

Seoul signed the first bilateral missile pact with Washington in 1979, despite the range limit of 180 km, on condition of U.S. assistance in missile technology development.

After years-long negotiations with the U.S. amid the North’s push for the development of advanced missile technology, the two allies agreed in 2001 to revise the original pact to extend the range to 300 km.

Seoul has so far focused on developing cruise missiles instead as the pact does not restrict their range. But the missiles are much slower and easier to intercept.