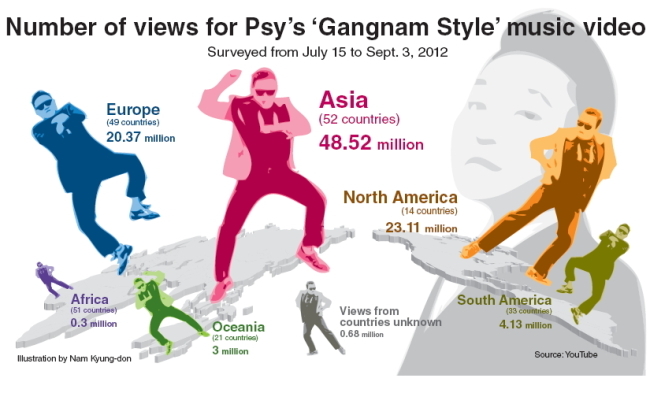 South Korean rapper PSY's ``Gangnam Style'' video has more than 200 million YouTube views and counting, and it's easy to see why. No Korean language skills are needed to enjoy the chubby, massively entertaining performer's crazy horse-riding dance, the song's addictive chorus and the video's exquisitely odd series of misadventures.

Beneath the antic, funny surface of his world-conquering song, however, is a sharp social commentary about the country's newly rich and Gangnam, the affluent district where many of them live. Gangnam is only a small slice of Seoul, but it inspires a complicated mixture of desire, envy and bitterness.

Korean rapper-singer Psy is enjoying great popularity in the U.S., taking the No. 1 spot on the U.S. iTunes Chart with “Gangnam Style” on Saturday and making appearances at NBC’s “Today Show” and “Saturday Night Live.”

South Korean rapper-singer Psy on Saturday topped the iTunes Chart with his single "Gangnam Style," making him the first Korean artist to reach No. 1 on the U.S. online chart.

YG Entertainment, Psy's agency in Seoul, said the chart-topping feat appears to have been aided by the singer's live performance in New York for NBC's "Today Show" on Friday.

Psy, who recently hit big with his mega-hit song “Gangnam Style,” has been invited to the 2012 MTV Video Music Awards, his management agency YG Entertainment said.
The 34-year-old singer will participate in the event which will be held at the STAPLES Center, Los Angeles, Thursday. Although he is not listed as a nominee for an award, MTV noticed the global popularity of his music video and officially invited him, according to the agency.

But Park, known as "Psy," has succeeded where the industry-manufactured girl and boy bands have tried and failed, making a huge splash on the mainstream U.S. music scene thanks to a viral video and a rare sense of irony.

Singer Psy signed a contract with a major U.S. record label, according to his local agency YG Entertainment.

The 34-year-old, who recently created a sensation with his latest hit “Gangnam Style,” will be working with Island Def Jam Recordings, the agency said.

Korean rapper Psy ― who is having a pop culture moment with his viral music video for “Gangnam Style” ― says he’s been doing funky choreography for a decade in his native Korea. But he’s excited his colorful style is being celebrated in the United States, and around the world.

“I did a lot of strange dance moves for 12 years in Korea,” Psy said in an interview Wednesday, adding that the reaction today reminds him of his musical debut back home. “This is kind of (the) same story.”

Corporate advertisers are rushing to sign Korean rapper and singer Psy to do his bizarre and comical horseback-riding dance in their commercials from his latest hit music video “Gangnam Style.”

Psy is in talks with six companies to appear in their ads, said an official with YG Entertainment, a music talent agency with which the singer is affiliated.

K-pop used to have a certain formula to be successful overseas. Korean pop artists had to be armed with youth, good looks and cool dance moves, and have plenty of TV exposure through variety shows. Not anymore. Going viral is the new rule.

Not-so-young, not-so-good-looking Korean rapper and singer Psy, whose horse-riding dance is more hilarious than cool, earned instant international fame when his latest music video went viral in recent weeks. “Gangnam Style” has amassed over 50 million views on YouTube so far, just over a month after it was put on the video-sharing site on July 15.

South Korean singer Psy will be meeting American pop star Justin Bieber’s manager, Scooter Braun, during a trip to the U.S., according to a representative of Psy’s agency.

“It will be an informal affair,” the YG Entertainment representative said over the phone, explaining that Psy had originally planned to visit America for some downtime and added the meeting to his itinerary approximately a week ago. Psy is slated to depart for the U.S. on Wednesday.