More women jobseekers prefer to look for employment at foreign-invested companies, hoping to avoid some of the barriers at Korean firms and seek a larger pool of opportunities.

More women candidates are emerging in the high-end human resources market, according to one executive recruitment firm.

“About 60 percent of our candidates are women who tend to be more flexible in managing difficulties than men. Once they are armed with strong, charismatic leadership, they make such powerful candidates ― here we are talking about high-end, chief-executive-level positions,” the chairman said.

Kim acknowledged, however, that some Korean conglomerates still implicitly ask for men, even if they do not mind, or sometimes welcome, foreign male leaders. 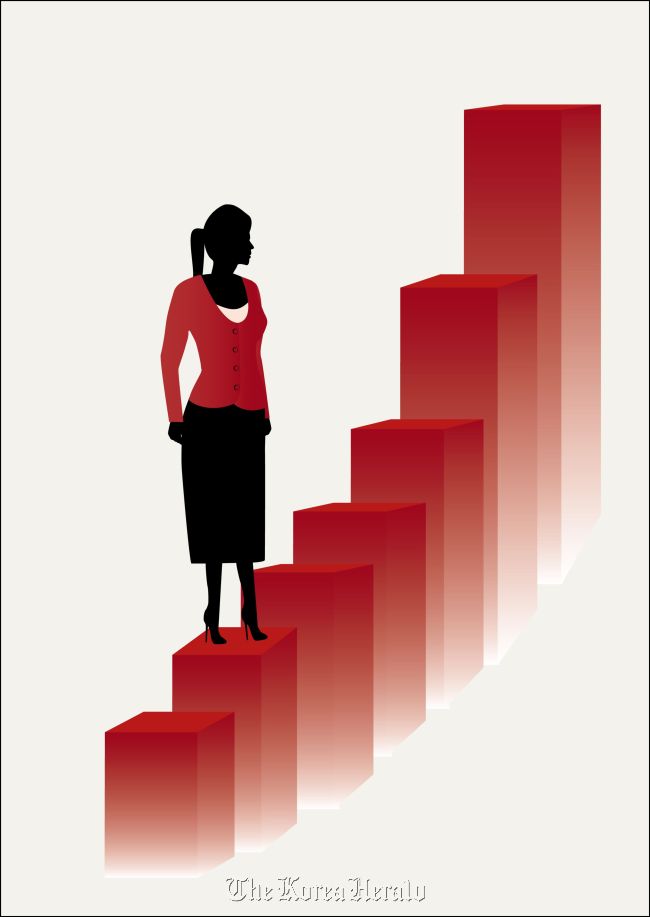 Women, both those at entry-level and with long careers, are fast to sense the male-preferences in Korea, and try to situate themselves in companies that make full use of their abilities while they can, he said.

“KOFEN’s female members take up about 60 to 65 percent of our membership,” Kim said. “And when you go to an offline socializing event, you will find two-thirds of the participants are actually women.”

KOFEN, an online recruitment service specializing in foreign companies, recently disclosed its research results that graduates of Ewha Womans University made up the largest number of staff in human resources divisions.

About reasons why women employees are left with less opportunity to display their abilities, Kim said that the cultural mindset of a company’s CEO tend to influence the company’s direction and culture of management.

“Korean firms, no matter if they are small or medium-sized companies or large conglomerates, have Korean owners and CEOs with a strong patriarchal mindset,” the KOFEN president said.

Foreign and multinational firms usually do not have owners presiding in the company, but instead have brand heads who tend to stay for about four years and leave the country for another branch or headquarters, Kim said.

“As a result, people working in these foreign firms have their own set of responsibilities and workloads. In other words, all they need to do is to mind their own business, without worrying about their colleagues’ jobs and responsibilities.”

Kim acknowledged that Korean conglomerates such as Samsung and LG were leading in the advancement of corporate culture, but still have a long way to go.

One former employee of Korean conglomerate POSCO, one of the world’s leading steelmakers, said she quit her well-paid job to work in a foreign company after months of painstaking deliberation.

“I felt like I couldn’t really become successful at POSCO,” she said.

The former POSCO employee said she was often frustrated when her achievement was depreciated because of gender.

“The company already has had a very male-dominant image, it really is like that. The most difficult thing was reading between the lines. As a woman, I had to be good, but I shouldn’t be too good.”

Kim said that another major reason women look to foreign companies is the high salary for specialists in their own fields, regardless of sex.

“Small or medium-sized foreign companies may give out smaller monthly pay comparing to large Korean conglomerates like Samsung and LG. But these foreign companies are ready to pay more for proven specialists.”

Foreign firms give more chances for overseas business trips and let employees sign up for vacation without pressure from the boss or colleagues, the KOFEN head said, out of his 17-years experience of working both in Korean and foreign companies.

“Of course you still had to get your work done in time.”

Another woman who used to work at a major Korean shoemaker said that she quit her job because her male boss verbally abused her.

“He said I was good for making coffee and anyone could replace my position. I was so stressed out because of his words and felt like I was wasting my highly trained skills on an unworthy job.”

“He kept pouring extra workload on my shoulders, and acted like it was all good and natural. He said these tasks were highly confidential and had me do them in addition to my regular workload. He even made me translate English legal documents into Korean when my job was actually in the overseas marketing and outsourcing division.”

Citing experiences from the female members of KOFEN, Kim said that people in foreign companies sometimes work overtime, not because their bosses are still sitting at their desks, but because they still have work to be done.

Also, women have a stronger sense of keeping the family relationship in good shape, he said. Because of this, they tend to excuse themselves from business dinners and social drinking parties, the KOFEN head added.

“Those who used to actively participate in such meetings tend to become more passive about those events after they have children.”

Corporate child care programs are one of the most powerful benefits for experienced female workers in their thirties.

Foreign companies’ childcare and welfare programs inspired Korean conglomerates to come up with various kinds of benefits for working moms as well.

Hyundai Motor and Kia Motors give out discounts to employees with three or more children. Daewoo Engineering and Construction delivers baby gift-sets with toys, clothing and other necessities. Samsung Electronics gives an extended period of maternity leave.