K-pop used to have a certain formula to be successful overseas. Korean pop artists had to be armed with youth, good looks and cool dance moves, and have plenty of TV exposure through variety shows. Not anymore. Going viral is the new rule.

Not-so-young, not-so-good-looking Korean rapper and singer Psy, whose horse-riding dance is more hilarious than cool, earned instant international fame when his latest music video went viral in recent weeks. “Gangnam Style” has amassed over 50 million views on YouTube so far, just over a month after it was put on the video-sharing site on July 15.
The 34-year-old artist’s video was spotted by U.S. pop idol Justin Bieber’s manager Scooter Braun, a prolific Twitter user with more than 1.8 million followers. His tweeting of Psy’s YouTube video link, saying “How did I not sign this guy,” led to “retweets” by fans of Justin Bieber, whose Twitter account has more than 26 million followers. U.S. pop singer Katy Perry joined the latest Psy craze, tweeting “Help, I’m in a Gangnam style K hole” on Tuesday.

By country, 47 percent of the 50 million views of “Gangnam Style” came from the U.S., 7 percent from the U.K., 6.8 percent from Canada and 4 percent from Korea, according to analysis by Park Han-woo, associate professor at Yeungnam University’s media and communication department. 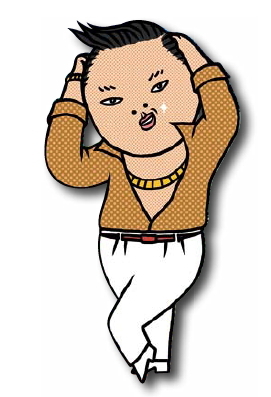 Psy’s global success shows that going viral on social media such as YouTube, Facebook and Twitter has become “a must” for K-pop artists looking for international exposure, industry watchers said.

With the fast international growth of K-pop, YouTube created an official K-pop channel under its music category in December.

Entertainment agencies cite “instant promotion effects with no cost” as the greatest strength of using YouTube as their K-pop overseas marketing tool.

“Social media tools allow us to save time and money for traditional PR events ― which can be redirected to more investment in new K-pop songs and artists,” said Kim Eun-a, spokesperson for S.M. Entertainment.

“Attention K-pop fans: Super Junior is back with a new hit video and a license to kill (on the dance floor). http://goo.gl/Sv3yM,” the tweet said.

Super Junior’s “Spy” music video generated more than 4 million clicks in just nine days after it was first put on YouTube on Aug. 12.

Facebook’s power is formidable as well.

2NE1 was interviewed on “Facebook Live” in Los Angeles on Thursday morning, Korea time, mainly talking with their fans about their first overseas concert held in New York on Aug. 17 that attracted about 7,000 concertgoers.

The Facebook interview, a rare event for a Korean act, attracted attention to their next show at the Nokia Theater in Los Angeles on Friday.