Lee Ye-eun vividly remembers the poverty her family went through in North Korea in the 1990s, during a famine believed to have cost some 2 million lives.

“Like other families, my family was living from hand to mouth and went to the nearby mountain each day to pluck grass to make porridge. My younger brother died of malnutrition,” Lee, 20, told The Korea Herald.

“My mother sold noodles at a marketplace to feed our family. The education I received was intended only to worship the dynastic ruler,” said the university student, who arrived in the South in 2007 after crossing the border with China in 2004.

Deprived of state benefits such as proper education, food rationing and medical care, her underfed peers in the communist state are thought to be less loyal to the dynastic ruler than the older generations. 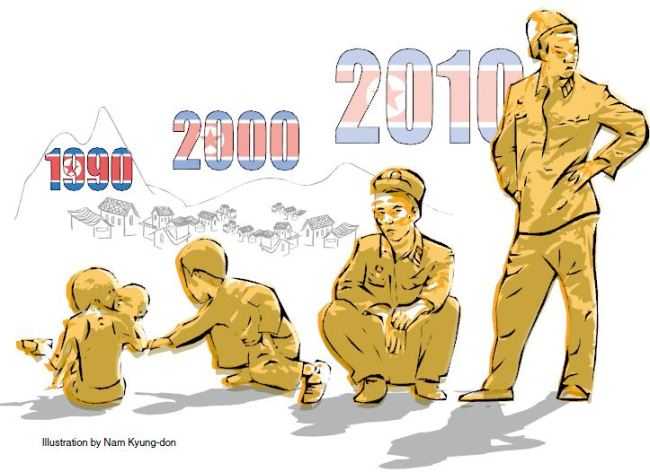 Many of them have non-conformist ideas, albeit inwardly as they experienced the devastating famine, known as the “Arduous March” in the mid- and late 1990s, experts said. International isolation following the collapse of the Soviet Union in 1991, bungled economic policies and flooding caused one of the country’s worst famines.

These people in their early 20s have now started climbing up the military and social ladders, brightening the prospect of change in the reclusive state.

“Unlike their parents’ generations that benefited from support programs by the North’s ruling Workers’ Party or its leader, the young generations were not fed by the state but by their parents who made a meager living through market activities,” said Ahn Chan-il, director of the World North Korea Research Center.

“They, thus, have no loyalty (for their leader). They may be critical of the current regime and could be a destabilizing factor for the ruling elites.”

Dubbed the “market generation,” they apparently have an inkling of the capitalist mechanism as their parents heavily relied on the market to bring home the bacon following the collapse of the food rationing system ― the critical source of public support for the autocratic leadership.

Before its national founder Kim Il-sung died in 1994, the North’s overall economic conditions were manageable with the rationing program working to secure much respect for the ruler.

Being exposed to South Korean pop culture through smuggled DVDs secretly circulating at marketplaces, some of them have also realized that they were deceived by the negative propaganda against their southern brethren.

“We had been brainwashed and thought that a capitalist society was really bad, and we could not live in it. That was before I watched Korean dramas and movies,” said Kim Moses, who was born in the North in 1987 and defected to the South in 2010.

“We came to terms with the reality that what was said there was all wrong. We had heard that the South was really poor, a totally different image reflected in the South Korean dramas.”

The discrepancy between what they heard and the reality led to their frustration and discontent, which further deepened amid a tightening state control over people’s economic market activities.

“Many merchants were not successful as they had no job skills given that they had relied only on the food rationing program. Adding insult to injury, there were many restrictions at the marketplace, and our stuff was all confiscated in some cases,” said Kim.

“Many were obviously disgruntled, saying that even though they did not offer us food rations, they took away our stuff and even punished us.”

Such dissatisfaction was deeper among those who had no other option but to temporarily move to China to make a living, Kim recalled.

“Along the border areas, they crossed the river into China to get jobs, hoping to return soon to support their families. When caught, their money and all properties were seized. On top of that, they faced severe punishments,” said Kim.

“Oftentimes they just became stranded in a foreign country.”

With the growing displeasure over the state governance, the young generation could become the driving force for a much-needed change in the North some time later, observers said.

“In a situation where the North is forced to make some overhaul (for its survival), these people could spearhead the internal change. But opening up completely is still far from the reality now,” said Jeung Young-tae, senior researcher at Korea Institute for National Unification.

Jeung also noted that particularly in the military, the disgruntled generation could cause problems such as desertions and other aberrant behavior.

“Their discontent may deepen as the rationing system even in the military crumbles. They could leave their bases, particularly in the units near the border with China and sell their military property at marketplaces,” he said.

“This sort of corruptive behavior may not lead to some sort of coup in the short term, but we cannot rule out the possibility.”

Despite the anticipation about their role in bringing about a change in the North, some experts say that there is not much we can expect from the young generation.

“Basically, they did not receive proper education. Therefore, it is somewhat difficult to believe that they can make any critical political moves. They would rather try to climb up the social ladder while struggling to conform to the existing system,” said Dong Yong-seung, a North Korea specialist at Samsung Economic Research Institute in Seoul.