Network neutrality has become the center of debate in Korea as the state telecom regulator last Friday released its draft plan on how to use and control communication networks.

While the plan itself did not satisfy any of those involved in the debate, many say the Korea Communications Commission has given the upper hand to the country’s three telecom operators.

Network neutrality refers to the principle that the Internet should be kept open with the users having the freedom to choose any applications they want to use without restrictions or limitations set by their Internet service providers. 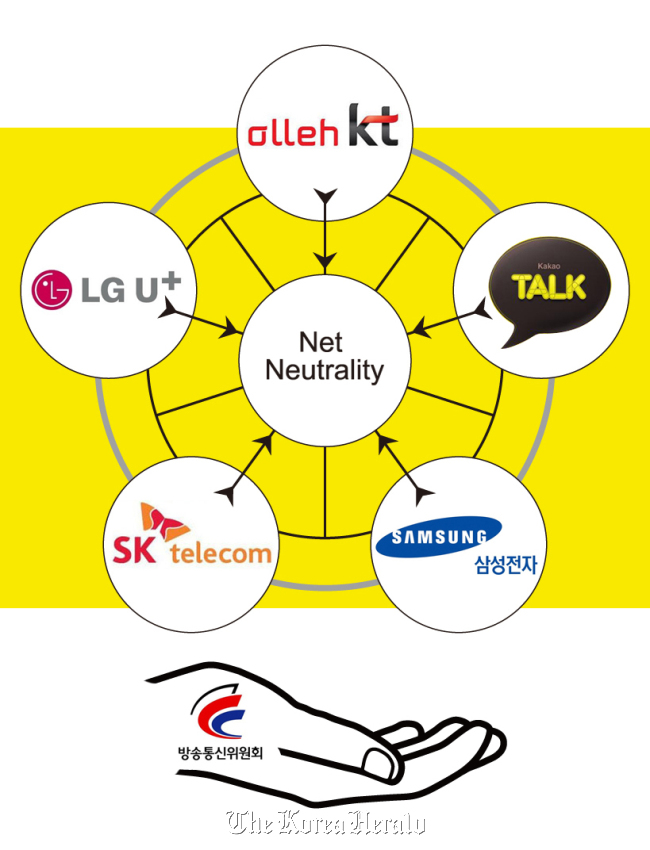 However, the application providers are against the move, stating that the use of the Internet needs to be kept free and open because it is a public good.

According to the plan, the Internet service provider can control its traffic if the users pre-approve to certain regulatory criteria. This indicates that the firms will be able to restrict access if it is written on a contract and signed by the subscriber.

It also states that Internet service firms can restrict Internet access by particularly heavy users if they are seen as clearly impacting the Internet use of others.

The measure will ban heavy users from viewing or downloading big files such as videos on websites like YouTube during the restriction period. However, they will be able to perform simple tasks like searching the Internet or checking email, it said.

The Internet service providers could also prioritize the restriction of data usage for applications that do not meet the standards for efficient use of the Internet established by a credible organization.

The plan granted the banning of peer-to-peer file sharing services for network operators during “certain hours with the most concentrated number of users,” stating that the act should be based on objective data.

Despite the potential controversy of the plan, the KCC mandated the telecoms to make public how they manage the traffic on their websites regarding the restrictions.

The details need to include the range and conditions of the restrictions as well as the related procedures, methods and impact, the plan said.

“We prepared the plan to decide the scope and standards of Internet traffic management to block telecoms from coming up with their own methods related to Internet traffic limitations,” said a KCC official.

“It’s not correct to say we have given advantage to a particular group.”

Where the debate stands

Internet operators and application providers have battled fiercely over Internet use, especially after the introduction of smart TVs and smartphones running on fourth-generation communications networks.

This is because data usage is expected to surge now that faster Long Term Evolution networks have been set up nationwide by the three local telecoms.

As an exemplary case, KT, the country’s biggest fixed-line service operator, has already shown its willingness to cut Internet services when it cut off service to Samsung’s smart TVs in February.

Accusing it of freeloading, KT urged the nation’s IT behemoth to pay its part in establishing the network infrastructure. Both sides have backed off following a warning from the KCC.

“We believed we had to get the network use payments from Samsung because it is not merely a TV manufacturer but a company that makes profits from selling its content through its TV App Store,” said a KT executive.

In response, Park Joon-ho, vice president of Samsung’s Digital Media and Communications Research Center, said it was not its smart TV, but watching YouTube videos on mobile phones that was the most traffic-heavy application.

Net neutrality was called into question again in June, when Kakao decided to test its free telephone calls with “Voice Talk,” its smartphone application extension that uses mobile Voice over Internet Protocol.

SK Telecom and KT made clear it would limit the amount people could use the mVoIP services, a move which civic groups and the public opposed. LG Uplus also gave restrictions but offered the service to a bigger category of subscribers.

Meanwhile, KCC is scheduled to announce a finalized guideline on the country’s network use and management, possibly later in the year, after receiving the opinions of experts and concerned parties.