Touring the world’s cities, 91 days at a time

But for Mike Powell and Juergen Horn it’s a reality.

Their current stop is Busan, and they say they’re “head over heels.”

The two of them continue with their regular jobs while on their travels, which they keep a regular update on their blog “For 91 Days.” Powell is a computer programmer and Jrgen is a photographer, which means they don’t need to report to a boss or go into an office.

“It took a long time for us to recognize the kind of freedom this gives us. We’ve both always been big travelers, and love experiencing other cultures,” said Powell.

“Eventually, we realized that we should use our freedom to the maximum extent possible ... as long as we have an Internet connection, we can work like normal.”

He said that they came up with 91 days because they wanted to live in four places a year.

They also felt it was the perfect amount of time ― long enough to get to know somewhere without getting bored.

“You can really get to know a city in the span of three months, and that’s what we’re looking for ― a sense of familiarity with its neighborhoods and people,” said Powell.

“Usually by the end of our three months, we’re excited to get moving onto the next location. But, we definitely could have used another month in Bolivia, where we just ran out of time and had to skip entirely on regions like Tarija, that we had been excited about.”

He added Buenos Ares was another place he could have spent more time.

After a stay in Sri Lanka, they decided to stay in Asia, and as they had little experience of the Far East, curiosity led them to Busan.

“When foreigners visit South Korea, they always spend time Seoul but usually overlook Busan, and we liked the idea of exploring a big city that wasn’t squarely on the tourist itinerary yet,” said Powell.

Their biggest impression on arrival was how modern and clean everything was.

“Just being in a city again was wonderful,” said Powell. “And Busan was exactly what we needed: a big city, but not overly stressful or crowded, like Seoul or Tokyo might have been. 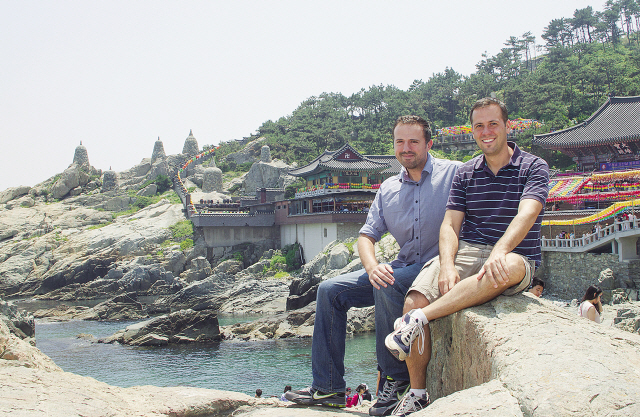 “And we didn’t even have to give up entirely on the hiking and great nature we enjoyed in Sri Lanka; Busan has plenty.”

He gave a traditional drumming performance at the Gugak Theater, a Lotte Giants baseball game, and temples lit by lanterns during Buddha’s birthday as highlights. There were also more things to look forward to.

“We’re excited about going to a spa ― that’s one of those quintessential Korean experiences that we’ve just been putting off, probably because of the nudity!” said Powell.

He added that he was also looking forward to seeing Gyeongju, the city’s aquarium, and of course Beach season.

But not everything has been fun.

“For Juergen, it was definitely the Millak Raw Fish Market, where we ate sashimi and raw, still-twitching octopus,” said Powell.

“For myself, more than anything, I’m horrified by how terribly people here drive. There have been a few times that I’ve almost been run down by a car speeding over a red light, or a motorcycle on the sidewalk.”

There were also one or two unexpected aspects, for better or worse.

“We both expected Busan to be a lot more hectic than it is. There’s a laid-back attitude here, which was surprising ... maybe because of the beaches or nature, or just because it’s in the southern end of the country and things are more relaxed here,” said Powell.

He added that they had had more language problems than expected.

Busan may be more laid back than expected, but the pair’s next stop should be altogether more relaxing. Far from the crowds of Korea, they are headed for the northwestern United States.

“I’m from the States, but have never visited this section of the country. It should be an interesting time ― cowboys, Yellowstone Park and unbelievable nature,” said Powell.

He said the two of them would continue for as long as they were enjoying it.

“Originally, we set out with the intention of stopping after a few years, but the more places we see, the more we want to see. So we’re thinking at least five years,” he explained.

“Afterwards, I’m not sure. Our home base is Valencia, Spain, so we’d likely return there,” he said.

“But wherever we end up, I’m certain that traveling is always going to be a major part of our lives.”