[VOICE] How can Korea end poverty?


Korea’s meteoric rise to prosperity since the 1960s is often cited as an almost unparalleled example of success in lifting a population out of poverty. But despite a vast improvement in living standards since the aftermath of the Korean War, poverty remains an everyday reality for a significant number of Koreans.

According to the Organization of Economic Cooperation and Development, 15.2 percent of Koreans earn below 50 percent of the median wage after taxes and government transfers.

Some of this poverty is relative, measured against the wealth of society as a whole, rather than reflecting people’s ability to make ends meet. Nevertheless, a widening gap between the richest and poorest has become a major concern of the public as well as the political classes.
More striking for a developed country is the number of households in absolute poverty. According to a study by Korea Institute for Health and Social Affairs covering the years 2004-2009, 27 percent of households had seen their income fall below the absolute poverty level for a least one year, meaning they couldn’t meet the costs of basic goods.

Kim Kyo-seong, a professor at the School of Social Welfare at Chung-Ang University, believes the government underestimates the scale of poverty in the country, something reflected in its meager welfare provision.

“The government makes the problem worse or even they try to hide the exact number or exact scale of poverty (affected) households,” said Kim. “Only 5-6 percent of households or less can receive the benefits from the social security or social assistance programs. The government must make a more generous social assistance program and try to make more decent jobs … with adequate wages.”

Kim identifies a high percentage of irregular workers in particular as a major driver of poverty here. Last year, irregular workers made up more than 34 percent of the country’s workforce, according to official figures, high by OECD standards. Other estimates put the figure at more than 47 percent.

Elderly poverty also sets Korea apart from other wealthy countries: More than 45 percent of Korea’s elderly fall below the poverty line, compared to the OECD average of around 13 percent.

“The national pension scheme, the old-age pension for the general public, was introduced in 1988. So it is relatively young and there are not many people who are receiving the pension benefit,” said Koh Yong-sun, a researcher at Korea Development Institute.

In 2010, 2.3 million people received old-age pension benefits from the National Pension Service out of 19.1 million enrolled, according to Rand Population and Labor, a U.S.-based policy think tank. When the NPS was set up, it was envisaged that recipients with 40 years of contributions would receive 60 percent of their income in pension payments. Fiscal realties mean this proportion will be reduced to 40 percent by 2028.

With many low wage workers unable to make regular pension contributions, Kim said, securing their future financial security will be a particular challenge.

Solutions are often drawn along ideological lines. Where one school of thought tends toward direct government assistance, the other emphasizes economic growth in the hope of lifting living standards for all.

A 1998 paper by the KDI attributed a reduction in the absolute poverty rate from almost 41 percent of households in 1965 to 7.6 percent in 1991 to economic growth.

Another study by the Harvard Institute for International Development in 1997 concluded that 10 percent GDP growth results in an equal rise in income for the poorest 40 percent of the population. The study’s authors cited the experience of Korea as generally supporting this thesis.

Other factors have been shown to contribute to the reduction of poverty.

“Growth with Equity: Policy Lessons from the Experience of the Republic of Korea,” a paper from the KDI, estimates that “3.2 percentage points out of 5.9 percent real per capita income growth during 1960-1985 can be explained by educational achievement.”

The report goes on to state that educational opportunities should be increased for the poor to escape poverty.

Kim believes economic growth is far less important to alleviating poverty than government programs. Korea, he argues, should move toward the high-tax, universal-welfare model of the Scandinavian countries.

“As you see, our big companies like Samsung always make big a profit but we can never observe a trickle-down effect at all. They get everything. In that kind of economic world, it (growth) means nothing.”

“Korea now needs to move on from strongly believing that the trickle-down effect will still work, meaning that economic growth can be spread equally to reduce overall poverty. A more comprehensive welfare program is necessary, especially in Korea where the majority of work in the labor market is precarious,” said Lee.

While current welfare framework has the right components, said Koh, its reach and effectiveness need improvement.

“Basically, we have all the elements but the problems lies with the effectiveness of these programs. For example the unemployment insurance only covers a small part of the working population so I think we need to make efforts to expand coverage of these insurance programs and also need to increase the coverage of the public assistance programs,” he said.

In Kim’s view, however, boosting labor market participation and productivity in small domestic industries should be the priority of the government.

“We need greater emphasis on promoting labor market participation, especially of low-skilled laborers. … We are witnessing an increasing gap between various sectors, for example between the manufacturing sector and the service sector. And also we are seeing a widening gap between large corporations and small and medium-sized enterprises.

“The basic drive between this widening gap can be found in the productive growth in the manufacturing sector … while the domestic industries remain very uncompetitive because they are not exposed to foreign competition.”

Added to this, should be measures to train low-skilled workers, said Koh, who believes there is little the government can or should do about the size of the gap between the rich and poor itself.

“The government should make efforts to help low-skilled workers retrain themselves for example or to find better matches in the labor market. Currently the public employment service is rather weak … the spending, for example, is very small compared to other OECD countries.”

On tourism to Korea...

I’ve had those great guides offer to help in Itaewon and COEX Mall.

But once you get out of Seoul you’re in trouble and I mean big trouble. If the locals understand English they don’t want to help you as they may feel ashamed at their poor English whereas in China almost everyone will give it a try to speak English so as to help you just a little.

When I visited the densely populated area of Gunsan and Jeonju I was amazed at the lack of English even though the Koreans seem to spend a huge amount of time studying the language.

Believe me the first thing the authorities need to do to help us poor foreigners is to get native English speakers to spell the road signs, plus almost anything in English.

For example, when I first was trying to find Gunsan, naturally I asked for Gun-san (like a gun or pistol) but the locals all pronounce it with a ‘k’ like Kunsan. As for Jeonju is sounds like our Cheong-ju.

I think you get my point by now. Even the airport is pronounced “Inchon” but spelt “Incheon” so that it sounds like “In-che-on,” so you can understand how confusing it is.

There are so many things the authorities could do to help us tourists.


In the global age, international tourism has steadily increased, as well as the importance of the tourism industry for the economy of many countries. Owing to numerous efforts, tourism enabled Seoul to be selected as one of the world’s greatest cities by CNN GO for three consecutive years.

Some out of the 50 reasons of selection were K-pop, the variety of side dishes, being the most wired city, McDonald’s delivery service, heated floors, Korean food (live octopus, kimchi, bibimbap, bulgogi, soju) etc.

Among the 50 reasons, I discovered that two items were related with sports; our ice princess Yuna Kim and taekwondo. Reasoning from this listing and more, I strongly believe “sports tourism” is a promising method for enhancing Korean tourism. Sports tourism refers to travel that involves viewing or participating in sports, often outside of one’s home country. The sports tourism market currently occupies an astonishing 14 percent of overall tourism, and is the fastest growing sector in the global travel industry. Korea was able join the ranks of developed countries by holding the Seoul Olympic Games and the Daegu IAAF World Championships, 2011. And soon on, Korea will be holding the Colorful Daegu Championships Meeting, 2012 and the PyeongChang Olympic and Paralympics Winter Games in 2018.

Korea also possesses developed resources for sports tourism, based on Korean professional team leagues such as baseball, soccer, volleyball and basketball. Although our sports lack competitiveness when compared to English soccer or American baseball, I believe that we can overcome these weak points. When I watch the games mentioned above on TV, there are many foreign players and spectators. If we dig out hidden sport stars and enhance our capacity of scouting foreign players, it will enable us to attract more foreigners to visit and tour Korea.

In addition, Korea should provide systematic programs to guide foreigners through Korea. For example the government could introduce a “one week Korean Sports Tour program,” including information of the time, location of the sports event, and additional info about famous Korean meals and restaurants, public transportation, and accommodation facilities. Special discounts and the accompaniment of a tour guide may attract the attention of tourists as well.

If the central government and local businesses get together to design a sports tourism project while cooperating internationally, sports tourism just might be the answer to increasing tourism in Korea.


Korea’s strategy for abroad is so called “silent.” This can be revealed easily. Dokdo is one example. The world doesn’t know that Dokdo belongs to Korea. Some may mistakenly think that Dokdo is the territory of Japan. The situation is getting worse. China also strenuously insists that Ieodo belongs to them.

Like this, Korean administrations are not good at asserting their rights. That’s sometimes not just “not good,” sometimes it sucks. They need some more skill and effort to inform others about what we have.

In short, Korea does a terrible job of promoting itself. If we want to increase tourism, we have to make sure others know what is Korean. 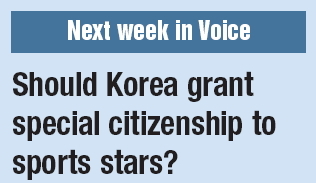