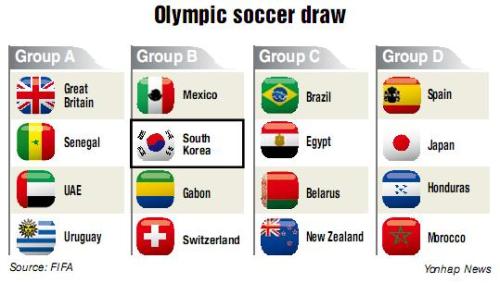 South Korean Olympic soccer team has good chances in London this summer as it has been grouped with relatively weak teams, local officials said Wednesday.

In a draw held in London on Tuesday, Korea was placed in Group B along with the top-seed Mexico, Switzerland and Gabon.

The draw seems to be the best possible scenario for manager Hong Myung-bo’s side as they have now avoided facing the three other top seeds ― Great Britain, Brazil and Spain ― in the group stage.

After attending the draw on Tuesday, Hong was cautious in making an early prediction on the group qualifiers.

But he picked the Mexican side as one to watch out for.

“I watched their Concacaf qualifying tournament. Their players have good skills and speed. They are also tactically strong,” Hong told the Korea Football Association.

“Gabon also topped its African qualifying tournament. We can’t dismiss anyone in the group,” Hong added.

Korea, which finished its final Asian qualifying round unbeaten with three wins and three draws in six matches, is aiming for its first ever Olympic soccer medal.

Mexico, which reached the semifinals in 1964 and the quarterfinals in 1996, will be making its tenth appearance at the Olympics.

The Korean U23 team has played against Mexico six times, with Korea having a slight edge with a 2-3-1 record. The last time the two met was in 2004 in Athens, where Korea beat Mexico 1-0.

Switzerland is making its first appearance in the Olympics since 1928, although it won a silver medal in 1924. It is the first time Gabon has qualified for the Olympics, but the African side beat the favorite Ivory Coast and South Africa on its way to secure a berth in London.

Hong noted that his team would now focus on the group qualifier.

“The first thing is to make it through the group stage, and after that no one can expect what’ll happen in the tournament,” he added.

Meanwhile, in other groups, host Britain will face Uruguay, the UAE and Senegal in Group A, while Brazil will meet Egypt, Belarus and New Zealand in Group C. European champion Spain will take on Japan, Honduras and Morocco in Group D.

The top two teams from each group will qualify for the quarterfinals. The soccer matches at London 2012 will be staged at six stadiums around the U.K., including venues in Wales and Scotland. The final will take place at the Wembley Stadium in London.