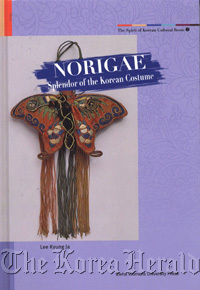 Norigae: Splendor of the Korean Costume

For anyone who is familiar with Korea’s traditional costume, hanbok, the term “norigae” will ring a bell. A decorative pendant hung from the inner or outer tie of jeogori, the upper piece of a hanbok, norigae carries both aesthetic and emotional traces of women from the Joseon era (1392-1897).

Scholar Lee Kyung-ja’s English-translated book, “Norigae: Splendor of the Korean Costume” offers an insightful introduction to norigae and their history, practical uses, and things they used to symbolize during the Joseon period. According to Kim, norigae were exclusive to the Joseon era, and were made of precious materials, including high-quality silk, gold, silver, jade and pearls.

“The word ‘norigae’ originally refers to ‘pretty and playful objects,’ or ‘favorite trinkets,’” Lee writes in her book, which has been translated into English by Lee Jean-young.

“True to those meanings, Norigae were cherished and worn by women of all classes: queens, princesses, concubines, lades-in-waiting, noble-women, and commoners alike. However, the Norigae were of different sizes and materials, according to the social rank of the wearer.

Women also were expected to wear different norigae depending on the time, place, occasion, season or ceremonial event.”

The motifs of the main ornament of the norigae were inspired by nature, everyday objects and “auspicious” characters, according to Kim.

Bells were believed to chase away evil spirits, while axes were used as lucky charms to drive away contagious diseases. Ducks, on the other hand, were considered love birds, and symbolized the love and harmony of a married couple. Orchids represented beauty, while chili peppers and eggplants represented a woman’s wish to have as many male offspring as possible.

Norigae weren’t just an accessory. Some women used their main ornament as their perfume case, carrying musk or other aromatic substances. The ornaments were also sometimes used as a needle case, as “diligent needlework” was considered as a feminine virtue.

Many also carried an ornamental knife, called “jangdo,” attached to their norigae. The knife was one of the three essential items that Joseon women carried along with mirrors and combs.

“‘Jangdo’ served to protect the wearer and symbolized that virtuous women would rather take their own lives than be violated,” Kim writes. “Sometimes, a silver spoon would be attached to serve as a utensil away from home or to be used for detecting poisoned food.”

The rest of the book deals with the proper way of wearing a norigae, how they were worn during Joseon’s royal rituals such as weddings and funerals, and Kim’s view on where the traditional pendant stands in contemporary Korea, especially with modernized hanbok.

The book is complemented with colorful photos with countless kinds of norigae, including jangdo norigaes, perfume case norigaes, and needle case norigae. Kim offers interesting facts and analysis about Korea’s traditional accessory, deftly linking it with Joseon’s Confucius culture and the lives of women of all classes during the period.

She has served in many academic positions, including head of the Ewha Fashion Design Institute and the president of Korean Society of Costume. She’s published a number of books on Korean costume as well, including “Korean Costume and Paintings” (1990) and “The Traditional Style of Korean Costume” (2003).