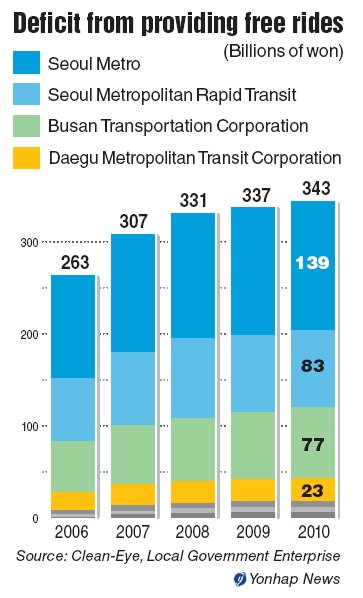 The deficit incurred by the nation’s subway systems has continued to grow, largely as a result of providing free rides, according to information released by a local firm Wednesday.

According to the data by Clean-Eye, a management information disclosure system for local government enterprises, the deficit caused by providing free rides throughout the nation over the past five years reached 1.58 trillion won ($1.7 billion).

Last year alone, providing free rides to senior citizens, the handicapped and men of national merit racked up a deficit of 343 billion won.

The data highlighted a growing population of senior citizens and the rising cost of supporting this demographic.

Seoul Metro, operator of lines 1 through 4, and the Seoul Metropolitan Rapid Transit, lines 5 through 8, estimate a deficit of some 139 billion won and 83 billion won, respectively.

In Gwangju, nearly a third of patrons using the rapid transit system were provided with free rides while Seoul and Incheon provided roughly 12 percent and 9 percent, respectively.

The net loss for the companies last year totaled 870 billion won, with the loss from free rides making up just under 40 percent.

Earlier this year, Seoul officials said they are looking to raise the age of senior citizens who may ride the system for free from 65 to 70 to cut losses by up to 50 percent.