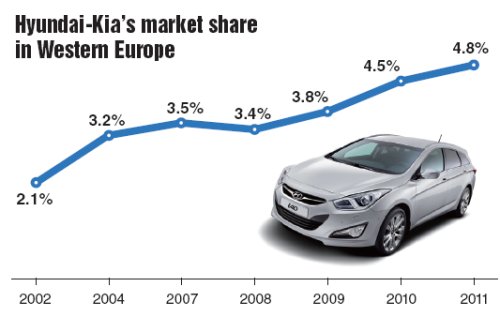 Hyundai Motor has embarked on securing competitive sales networks in Germany and France, which account for 41 percent of the European automobile market.

The automaker will take over wholesale distributors in Germany and France from Switzerland-based Emil Frey, as part of its strategy to enhance marketing and sales in Europe.

The Hyundai Motor Group said Tuesday that Hyundai Motor Europe Corp. will acquire a 70 percent stake in a German dealership company from Emil Frey, the second-largest dealer group in Europe.

As it has already a 30 percent stake in the company, its shareholding will reach 100 percent. A Hyundai sales corporation will be set up in Germany, based on the acquisition.

Hyundai Motor registered sales in Germany of 61,378 units in the first 10 months of 2011, up 29 percent from the corresponding period last year.

It also plans to take over a French dealer company from Emil Frey to establish a sales corporation in France.

Its French sales between January and October posted 19,000 units, up 12 percent from the same period last year.

“With the establishment of sales corporations via takeover of dealers in Germany and France, we believe out competitiveness will strengthen in the European market,” a Hyundai spokesman said.

The carmaker captured 2.9 percent of the European market with sales of 339,250 units for the first 10 months of the year, up 0.4 percentage point from the same period in 2010.

Hyundai has been seeking to improve its brand awareness and image especially in the big five markets in Europe ― Germany, Britain, France, Italy and Spain.

While the big five account for about 75 percent of the European automobile market, Hyundai’s market share in those countries is relatively small compared to its presence in other European countries such as the Netherlands and Belgium.

Hyundai Motor and its affiliate Kia Motors overtook Toyota Motor in their combined sales in the European market in 2010.

Kim, who is also a managing director at Hyundai-Kia Group, said he is certain that Kia will also be able to overtake Toyota in sales in the coming years.

Hyundai-Kia expect that competitive models such as Hyundai’s mid-size wagon i40 and Kia’s new Pride subcompact will spearhead the group’s growing sales and bolster its brand recognition in Europe.