Playing at home and away

With the exception of military club Sangju Sangmu, each of the K-league’s 16 teams is permitted to include up to three foreign players in its lineup, plus another from within the Asian Football Confederation. The number of foreign players allowed per club has varied since the league’s inception in 1983. From a maximum of three per team at the league’s outset, the limit reached a high of seven for the 2002 season, and has been lowered and raised regularly since.

Although the lion’s share of the league’s foreign players have been Brazilian, the league has become ever-more cosmopolitan in recent years. Croatians, Dutchmen, Colombians and Uzbeks are just some of the many nationalities that now play the beautiful game here. But deciding upon the right number of foreign players to allow into the Korean game is a balancing act. On one hand, it is argued, importing more foreign talent can improve the quality of football. On the other, it can deny Korean players the chance to hone their game, conceivably affecting the vitality of domestic soccer. 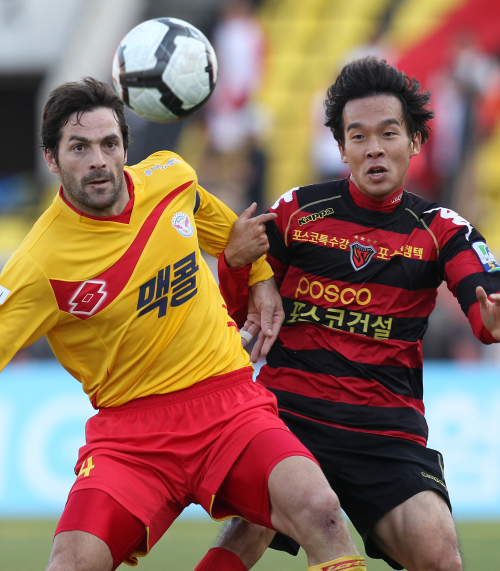 Yes ;It can only improve the game

The K-League is one of the strongest leagues in Asia, with member clubs consistently performing well in the Asian Champions League. However it is still a developing competition, with significant room for improvement. I believe that an increase in the number of foreign players allowed at each club would be of great benefit to both the K-League and the Korean national team.

An influx of foreign players from around the world would lead to an improvement in the quality of matches between Korean club sides. You only need to look at the development of the English Premier League to see how this is the case. Since its inception in 1992, the importing of foreign flair and dynamism has made the EPL the most watched league on the planet. The knock-on effect of this aesthetic improvement is an increase in stadium attendances and more coverage on television. While football currently plays second-fiddle to baseball in Korea, this could change if the quality of matches was consistently higher. The passion displayed for the national team during the World Cup demonstrates the potential for increased fandom during the domestic season. In the early stages of the Japanese J-League, big name players such as Gary Lineker and Zico were imported to increase interest in the game. If attendance and revenue were to increase at Korean clubs, what is to say we won’t see similar “galacticos” grace the peninsula in the future?

There have been many successful imports to the K-League over the years. Seongnam’s Sasa, Molina at Seoul, and Edu (formally of Suwon) stand out as some notable examples. However many foreign players find it hard to adapt to the cultural norms and values of Korean life. The problem which arises is that some clubs are at a severe disadvantage if one or two of their imports become homesick, and leave while the season is still ongoing. This was perhaps most evident during Ian Porterfield’s “British revolution” at the Busan Icons, in the mid-2000’s. Chris Marsden and Jamie Cureton were expected to be star signings for Busan, but instead they quickly became dissatisfied with life at the coastal club and returned home after a handful of games. The Icons went on to win the FA Cup, but were less successful than expected without their imported stars. I believe that an increase in the quota for foreign players would help to address this problem. While one Brazilian may feel homesick, it is far less likely if there is room for four or five Brazilians at the same club. This would help level the playing field across the season in the K-League.

Many people claim that increasing the number of foreign players will have a detrimental effect on the development of home grown talent. However, I believe that learning unfamiliar skills from the foreign players will in fact improve the ability of Korean footballers. With so many national team players moving abroad to countries like Scotland, England and Germany, it is hard to imagine who is acting as role models for developing talent back home. Perhaps imported players can fill that gap, while stars such as Park Ji-sung and Lee Chung-yong demonstrate the quality Korean players have to offer in Europe.

Any suggestion of a complete removal of the current “foreign quota” system would be a somewhat ludicrous proposal; there must be a balance of native and non-native players on the pitch at any one time. However the foreign limit currently stands at just four per team, one of which must be from Asia. Perhaps an increase to six would allow for injuries throughout the season, and the implementation of a squad rotation system by K-League managers. If all non-Koreans played at once, that would still only account for just over half the team, which doesn’t seem too unreasonable. At the very least, a limit on the number of foreigners in the starting eleven, rather than at the club seems more logical than the current arrangement.

There seem to be very few negatives associated with increasing the foreign quota in the K-League. I believe it would see a rise in attendance, an improvement in young players, a greater ratio of successful imports, and a population more enamored with football than ever before. Surely this can only be a good thing for the future of the Korean game, at both club and international level.
By Will Evans

Will Evans is a former sports journalist, English teacher in Korea, and an avid follower of K-League football. ― Ed.

No: The current system works

The current allocation of three foreigners and one further Asian foreigner allowed to play for each club in the K-League is a well-devised system and allows for the teams to benefit from a mix of home-grown and imported talent. The introduction of more foreigners would disrupt this balance to the detriment of the league and the clubs.

Foreign players unquestionably benefit the league, its players and the supporters, but the quality of the incoming players is significantly more important than the quantity: for every Mauricio Molina there continue to be many costly Matheus Humberto Maximianos (No? He has played uninspiringly for Daegu this season). If an increase in foreign spots heralded the arrival of a Xavi or Rooney that would be one thing, but club budgets are already stretched, and the quality of imports would inevitably decline if costs had to be spread even further, harming the appeal of the league.

Such appeal is likely to be based upon perceived quality, excitement and competitiveness amongst the battling teams. Citizen clubs such as Gyeongnam, Incheon United and Daejeon have in recent seasons been able to disrupt the conglomerate-owned big boys to enter the season-ending playoffs and this benefits the league as a spectacle and encourages growth in fan bases for the successful teams.

A club like Incheon United illustrates the risks of the boom or bust nature of relying on transfer income from selling successful imports on to richer K-League clubs. Standout foreigners helped garner positive on-field results in past seasons and the subsequent selling of forwards Dejan Damjanovic and Dzenan Radoncic left the club financially stable in the short term. However in the last three years similar assets have not been unearthed and the club has instead found itself confronting disappointing results, reduced attendances and ultimately economic problems. As a result, they have since placed more emphasis on youth development to try to safeguard their future. Focusing on the longer term option of bringing young Korean players through to the first team is a lower risk and more beneficial building block than buying foreign players, which history suggests are less likely to prove themselves or stay around long enough to provide stable foundations for development.

Gyeongnam provide a great example of the results of a flourishing youth system. In the last eighteen months Yoon Bit-garam and Lee Yong-rae have become national team mainstays, whilst 19-year-old striker Yoon Il-rok has produced promising displays in the league and for the U23 Olympic international team. The sizable transfer fee received last winter from Suwon for Lee allowed Gyeongnam to keep hold of assets such as Yoon and lessened their reliance on finding sellable foreigners. As such the multi-million dollar transfer fee received for Brazilian striker Lucio this summer acted as a healthy bonus instead of a survival necessity.

It is imperative that as much as possible a level playing field is maintained in the K-League. The fact that almost none of the citizen clubs have filled their foreign player quotas this season shows that an increased allocation of foreigners would only benefit the wealthier company-owned clubs. However, these clubs too benefit from the current foreign player limitations. The Asian Football Confederation imposes the same 3+1 system as the K-League in its continental competitions. Constructing a team around more than the permitted four foreign imports would hamper a club in the Asian Champions League- where Korean teams have been dominant in the last few years.

Also worth consideration is the connection between the national team and the K-League. A primary reason for the league’s formation was to aid the national side’s progression and the relationship remains as paramount to both of their ongoing successes today. The 2010 World Cup was Korea’s best campaign yet on foreign soil and, with the exception of three players, the squad was fully comprised of players who progressed through or still play in the K-League. In return, playing international football improves the level of the competing players back in the domestic league, a win-win situation.

Whilst there are currently plenty of problematic issues for the K-League to deal with ― match-fixing and low attendances to name two ― the allocation of foreigners in the league is not one of them. If anything, results on the continental and world stages suggest that on the pitch the game is in good health. Far from tampering with this successful formula we should revel in what is a golden age for Korean football.
By Iain Pearce

Iain Pearce is the host of English-language K-League podcast The Outside View. ― Ed.