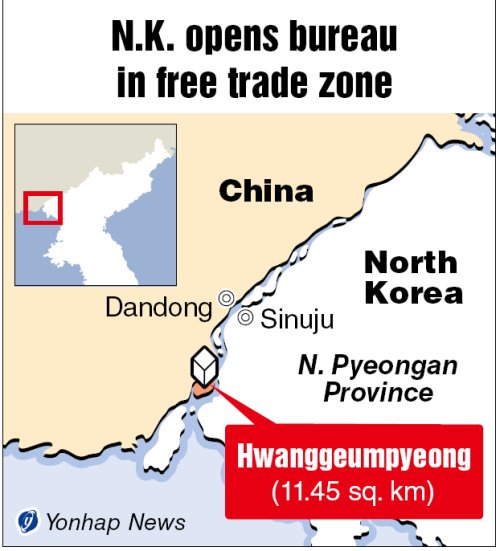 North Korea has opened a bureau tasked with running a free trade zone near its border with China, a source familiar with the country said Wednesday, indicating the North’s continued efforts to revive its forlorn economy.

The move came shortly after North Korea and China agreed to create joint economic complexes on the border islands of Hwanggeumpyeong and Wihwa following a summit between their leaders in May.

“North Korea has opened a bureau with some 10 staff members on Hwanggumpyong,” the source said, asking for anonymity. “It opened around August or September.”

The staff includes a ranking official who was in charge of operating the Gaeseong industrial complex near the western border with South Korea in the early 2000s, the source said, a sign that the North may want to develop Hwanggeumpyeong in a similar way to Gaeseong.

The inter-Korean industrial park in Gaeseong combines South Korea’s capital and technology with cheap labor from the North.

More than 47,000 North Koreans work at about 120 South Korean firms operating in the zone to produce clothes, utensils, watches and other goods.

In a related move, North Korea has added two more vice chairmen to a state-run investment committee charged with attracting foreign investment, the source said. The committee, which was launched in July last year, is known to be under the control of Jang Song-thaek, brother-in-law of North Korean leader Kim Jong-il and vice chairman of the North’s powerful National Defense Commission.

North Korea is seeking to boost economic cooperation with China, its closest political and economic ally, as Pyongyang struggles to achieve its stated goal of becoming a prosperous country by 2012.