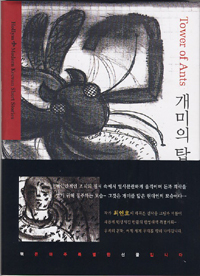 A young man who isn’t happy with his job as a copy writer for an advertising company, one day finds his flat suddenly infested with ants. He tries to get them out of his place, but their numbers only grow until they take over his personal space.

This grotesque and rather fantasy-like novella by author Choe In-ho delves into the meaning of lost individuality in a society forcing many to operate as part of a bigger system, just like ants in colonies that consist of millions of individuals.

The man, who feels rather like a robot in his workplace, is under huge pressure to produce new and original ideas for his advertisers. He is stressed by his work, and terrified when he is attacked by the insects at home. There is no place where he can be on his own without worrying about others.

He grows frantic and weary in the battle against the ants, until he realizes he is in fact no different from one of the insects in their huge colony. He makes a very shocking decision upon the realization, which leads to the novel’s powerful ending.

Filled with colorful metaphors and strong visual images, the novella successfully portrays the powerless individuals who eventually give in to the system, sacrificing their originality and personal aspirations. It also depicts the lonesome city life of a young working individual, who lives in desolation despite the paycheck he gets every month.

Born in 1945 in Seoul, Choe studied English literature at Yonsei University. He came into prominence in the 1970s, writing popular novels that displayed unique urban sentiments as well as social problems resulting from Korea’s rapid industrialization. He has won the Hyundai Literary Award and the Yi Sang Literary Award.