Two Puccini operas, quite different in scale and target audience, are expected to amuse both opera lovers and newcomers this summer.

For the first time in 21 years, the Korea Opera Group will present “Madame Butterfly,” one of the three best-known Puccini operas, from June 24-26 at the Grand Theater of the Sejong Center for the Performing Arts, after it showcased the popular piece there in October in 1990.

Celebrating the 22nd anniversary of the opera company’s establishment, the company has created a completely new production with a grand stage, spectacular costumes and veteran directing, the company said.

Premiered at the Teatro alla Scala in 1904, the opera is a staple in the operatic repertoire of companies around the world.

This time in Seoul, Italian director Maurizio di Mattia, who directed opera “Aida” with acclaimed conductor Daniel Oren, has produced a powerful interpretation of “Madame Butterfly,” the company said.
The libretto starts with 15-year-old Japanese girl Cio-Cio San falling in love with U.S. Navy lieutenant Pinkerton with the help of Japanese marriage broker Goro. Despite the opposition of relatives, Cio-Cio San, whose nickname is Butterfly, gets married to Pinkerton. The soprano and tenor sing the famous duet “Sweetheart, Sweetheart, Do Not Weep” in the first act.

In the second act, Pinkerton returns home and marries American woman Kate, but Butterfly waits for him for three years. She sings “One Beautiful Day,” the opera’s most popular aria and one of the best-loved works in the soprano repertoire. While waiting, she learns that Pinkerton’s ship has entered the port.

In the third act, Pinkerton learns that Butterfly has given birth to his son and visits her with his wife Kate. After hearing that Kate is willing to raise her child, Butterfly takes her own life with her father’s knife whose inscription reads, “Who cannot live with honor must die with honor.”

Japanese traditional costumes have been delivered from Japan to lend greater authenticity to the production.

The show will feature an impressive cast, including Korean soprano Giulia Lee and Japanese soprano Ando Fumico in the role of Cio-Cio San, and tenor Alessandro Liberatore and Ha Suk-bae performing Pinkerton. Giulia Lee was the first Korean opera singer to be cast as Cio-Cio San at the Teatro di San Carlo in Naples, Italy.

Meanwhile, the Seoul Metropolitan Opera is to showcase Puccini’s only comic opera “Gianni Schicchi” from July 6-10 at the Sejong Center’s M Theater. 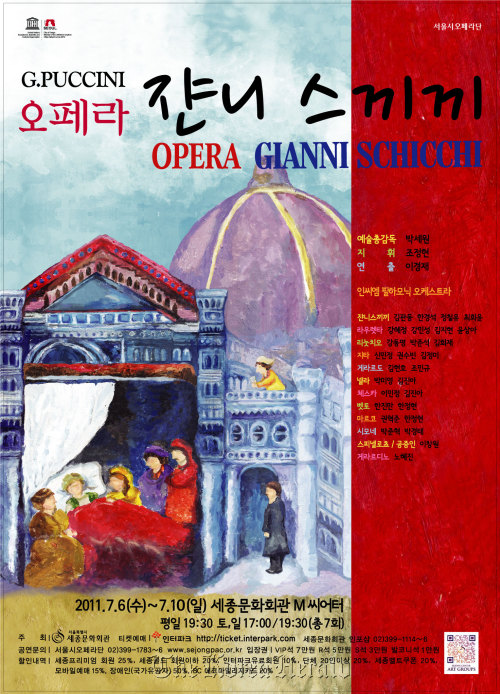 The opera company said the 70-minute, one-act opera will be easy to understand, as the opera’s story of family quarrels over inheritance after the death of a wealthy man can be easily related to modern society.

Also, the small size of the 600-seat M Theater will be good for opera new comers as the close stage allows for an intimate operatic experience, it said.

The opera begins with Gianni Schicchi dictating a new will of his deceased friend Buoso Donati. Comic tension follows as the hopes of Donati’s family come into conflict with Schicchi’s scheme.

The opera has a famous aria, “Oh My Dear Papa,” which veteran soprano Jo Su-mi once sang remembering her late father.

Rising young conductor Jo Jeong-hyeon and director Lee Kyeong-jae will collaborate for the show, while baritone Kim Gwan-dong and Han Gyeong-seok will perform as Gianni Schicchi.