By 배지숙
Published : Jun 2, 2011 - 17:59       Updated : Jun 2, 2011 - 17:59
Cervical cancer is the third most common cancer and fourth-leading cause of cancer mortality in women worldwide. More than half a million women are diagnosed with cervical cancer every year and the annual mortality rate for cervical cancer is more than 270,000. Unfortunately, the incidence rate of our country (15 in 100,000 women) is much higher than that of other developed countries (less than six in 100,000), and 3,880 new cervical cancer patients were diagnosed in 2008 according to an annual report of the Korea Central Cancer Registry. 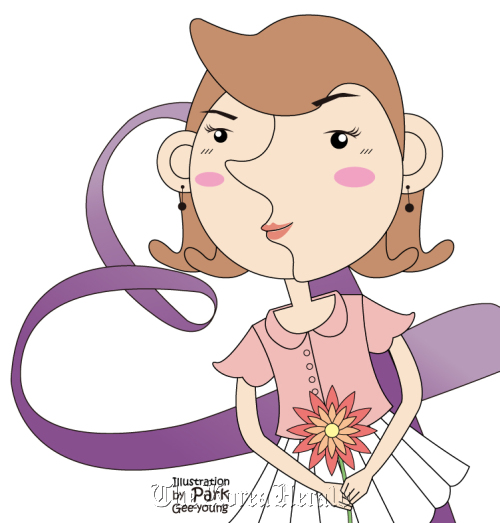 A persistent infection of the cervix with one of at least 15 oncogenic high-risk types of the human papillomavirus is a necessary cause of cervical cancer. Among them, two types, HPV 16 and 18 are the most frequently found and associated with 70 percent of cervical cancer cases worldwide. Genital HPV infection is usually, but not always, sexually transmitted.

Epidemiologic studies have demonstrated that most women remain at risk of HPV infection, with up to 80 percent becoming infected in their lifetime. However, most HPV infection is transient and regresses spontaneously. About 10 percent of women infected with HPV develop persistent infection, which is the most important risk factor for the development of precancerous cervical intraepithelial neoplasia (CIN) and cervical cancer.

In 2008, Dr. Harald zur Hausen received a Nobel Prize in Physiology or Medicine for his work about the role of HPV in cervical cancer. He identified HPV 16 and HPV 18 in cervical cancers in the early 1980s. This research made possible the development of an HPV vaccine. The HPV vaccine is composed of antigen known as a virus-like particle (VLP) and adjuvant. Antigen is necessary to induce the immune response of the body and adjuvant to boost it. VLPs are composed of HPV L1 capsid (coat) proteins and resemble the actual virus morphologically but cannot induce infection as these do not contain viral DNA.

Two HPV vaccines ― GlaxoSmithKlien’s Cervrix and Merck’s Gardasil ― are currently available in many countries. Both vaccines contain HPV 16 and 18 L1 VLPs and can prevent cervical cancer associated with HPV 16 and 18. But they are not identical and have differences: Gardasil additionally prevents the genital warts associated with HPV 6 and 11 and Cervarix uses a new adjuvant AS04 that is intended to boost the immune response to HPV 16 and 18. Both vaccines show near 100 percent efficacy against HPV 16/18-associated CIN2/3 in women without infection of HPV 16 or 18 when immunized.

Thus HPV vaccination is recommended ideally before sexual debut. However, women aged 15-26 who are sexually active can also receive the same benefit from HPV vaccination. HPV vaccines also seem to be effective in women who are over 26 years old and have a high risk of HPV infection. HPV vaccines have no therapeutic efficacy against existing HPV 16/18 infection or disease. Korean Society of Gynecologic Oncology and Colposcopy (KSGOC) announced a second version of the HPV vaccination practice guideline in April. According to the guideline, primary vaccination in Korea should be given to girls aged 15-17 and catch-up vaccinations to women aged 18-26. Girls aged 9-14 and women aged 26-55 could be vaccinated after assessment of the risk of their exposure to HPV infection.

Another way to prevent cervical cancer is by receiving regular cervical smear (pap smear) screenings. Cervical smears do not prevent development of the disease, but can interrupt progression to cervical cancer by detecting CIN2/3 lesions, which is then followed by surgical removal. Although regular cervical smear screening is highly effective, it has a weakness: It cannot detect some lesions ― up to 50 percent ― in particular those located in the endocervix (inner part of the cervix).

HPV vaccines are now available and we can reduce more than 90 percent of cases of suffering and death from cervical cancer through a combination of HPV vaccination and cervical smear screening.
By Kim Byoung-gie, M.D., Ph.D.

The author is a professor of obstetrics and gynecology at Samsung Medical Center. He also teaches at Sungkyunkwan University School of Medicine. ― Ed.