South Korea’s Environment Ministry dispatched Friday an investigation team to an area around a U.S. military base in Korea where barrels of Agent Orange were allegedly buried about 30 years ago.

A U.S. cable TV network reported on May 13, citing three former American soldiers who served in the U.S. Forces Korea, that they had buried the highly toxic substance at Camp Carroll in Chilgok, some 300 kilometers southeast of Seoul, in 1978.

Agent Orange is a toxic herbicide that was used by the U.S. military to clear jungles during the Vietnam War, which ended in 1975. The defoliant was later found to have been contaminated with an extremely toxic dioxin compound.

“After checking first the internal report of the U.S. side, we will make a basic judgment about the burial. Based on it, we will seek a joint inspection together with the U.S. military,” said a ministry official. 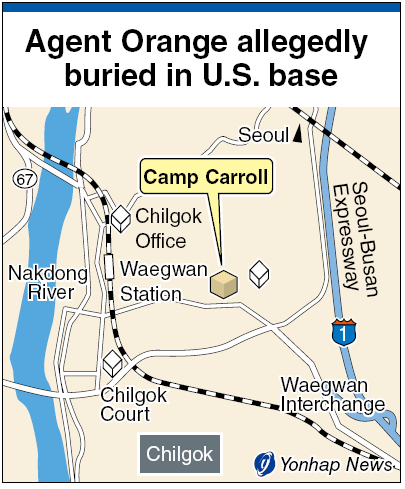 The inspection team was to check the soil and underground water near the U.S. camp. The ministry expected it would take about a month for the final results to come out.

On Thursday the ministry also demanded the United States verify the news report at a meeting of an environment committee under the Status of Forces Agreement. The U.S. Eighth Army that has Camp Carroll under its command said USFK was investigating.

The revelation of defoliant burial in Korea sparked safety concerns among civic groups and residents near the camp as Camp Carroll had been blamed for several oil spill cases a few years ago.

The Korea Centers for Disease Control and Prevention had earlier said it has not yet detected any abnormal change in the health of residents there for years.

“If Agent Orange was dumped in 1978, the drums may have already been eroded. And the toxic substance could have contaminated the soil and underground water near the area,” said Chung In-cheol of Green Korea United.

“Especially, the U.S. camp is situated just 630 meters away from the Nakdong River, which is the water source for major cities like Daegu and Busan,” he said, calling for the establishment of a government-private consultative group.

According to the news report by KPHO-TV, a CBS-affiliate television station in Phoenix, Steve House, one of the three former USFK soldiers serving at Camp Carroll in 1978, received orders to dig a ditch “nearly the length of a city block.”

“They just told us it was going to be used for disposal,” House was quoted as saying.

Robert Travis, another former USFK soldier, said, “There were approximately 250 drums. … On the barrels it said ‘chemicals type Agent Orange.’ It had a stripe around the barrel dated 1967 for the Republic of Vietnam.”

While he was moving the drums out of the warehouse, Travis said, a very small amount of liquid seeped through the barrels and then he developed a red rash all over his body. His health deteriorated after that, the report said.