Over 8 million jobs taken by 50s or older

Statistics Korea said Thursday that the number stood at 8.02 million as of the end of April, up 313,000 from the previous month. The figure is the highest ever recorded for the age group and is more than double the level in 1991, 4.03 million. 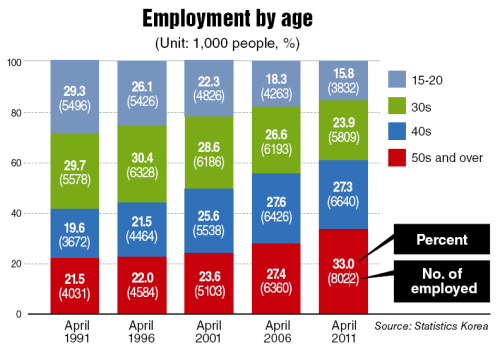 The increase was attributed to demographic changes in the country, where the low birthrate and aging population have been getting worse. Because youths now make up a smaller portion of the total population, older people now represent a bigger part of the job market.

The April figure accounts for 33 percent of the total workforce in the country, 24.3 million. Among the group, people in their fifties appeared most employable, with 5.08 million people of that age working as of April. It is an increase of more than 1.25 million from five years ago, and much higher than the 408,000 people in their sixties currently working.