BRUSSELS (AP) ― Greece’s government deficit was significantly bigger than forecast last year, European Union data showed Tuesday, underlining the difficulties the debt-ridden country is having to get its finances under control.

The country’s debt swelled to 142.8 percent of gross domestic product ― the highest in the eurozone and above the 140.2 percent the Commission had forecast ― according to data released by EU statistics agency Eurostat.

Greece had to be saved from bankruptcy with 110 billion euros ($160 billion) in rescue loans last May, but continues to struggle to raise revenue as its economy shrinks. 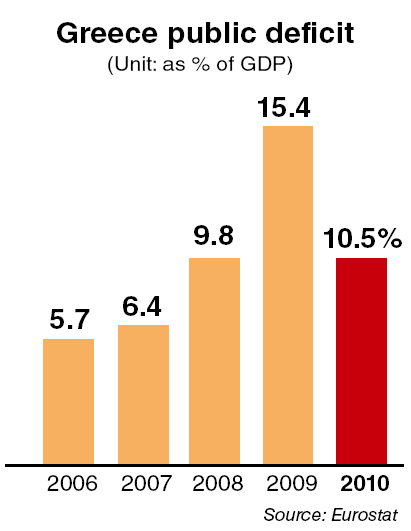 Most economists expect the country will eventually have to restructure its debt ― by asking creditors either to give it more time to repay or even cut the total amount owed. However, EU officials have so far ruled out a restructuring.

The Greek finance ministry attributed the larger deficit to a deeper than expected recession, which cut into tax revenues and social security contributions. It nevertheless conceded the figures showed more needed to be done to stop tax and social security evasion and cut costs in hospitals, local administration and public enterprises.

“In any case, the Greek government remains committed to achieving its deficit targets under the Economic Adjustment Program and will take all necessary measures in that direction,” the ministry said in a statement. The government has already unveiled plans to cut an extra 23 billion euros in expenditure by 2015 and privatize some 50 billion euros in public assets.

In its bailout program ― which spells out Greece’s path to financial health ― Athens promised to get its deficit below the 3 percent maximum allowed by EU rules in 2014.

The 17 countries that use the euro had an average deficit of 6 percent last year, down from 6.3 percent in 2009.

The highest deficit was produced by Ireland ― the second country that needed to be bailed out by other EU nations and the International Monetary Fund ― reaching a record 32.4 percent of GDP because of expensive bank bailouts. The deficit was only slightly above the 32.3 percent forecast last fall.

Portugal, which is currently negotiating its own package of rescue loans, had a deficit of 9.1 percent, way above the 7.3 percent the Commission had expected last fall, but Lisbon had warned markets of the upward revision on Saturday.

Eurostat also lifted Portugal’s deficit figures for 2007, 2008 and 2009, by 0.4 percentage point, 0.6 percentage point and 0.8 percentage point respectively, citing changes in how the debt of certain public companies had to classified. Those changes, which mostly affect the valuation of so-called bad banks and other public assets gone sour, were also the main reason for the higher deficit last year.

There were some good news for Spain, the country that most analysts view as the next weakest link in the eurozone. It’s deficit was 9.2 percent of GDP, slightly below the 9.3 percent forecast by the Commission.

Euro newcomer Estonia was the only eurozone country to produce a surplus ― 0.1 percent of GDP ― last year, but the tiny Baltic nation adopted the common currency this January.

Overall, the eurozone managed to cut the massive deficits it built up during the financial crisis faster than predicted. Apart from the three most troubled countries, Greece, Ireland and Portugal, only Austria failed to undercut the Commission’s autumn forecast.

The small Alpine nation’s deficit rose to 4.6 percent in 2010, above the 4.3 percent forecast, due to the same accounting changes that hit Portugal.

The United Kingdom, which is not in the eurozone, recorded a deficit of 10.4 percent of GDP ― the third highest in the EU behind Ireland and Greece. However, Eurostat said it had some reservations on the quality of data reported by the U.K. because of the way the country records its military expenditure.

Eurostat spokesman Tim Allen said it was too early to tell for which years and by how much U.K. deficit figures would have to be revised to comply with the agency’s rules, but because the issue was only related to the timing of the expenditure rather than the overall amount, any revisions should not affect the U.K.’s debt levels.