South Korea has already begun work to renovate a heliport on its easternmost islets of Dokdo in an effort to reinforce the country's sovereignty over the territory amid Japan's continued attempts to lay claims to the islets, officials said Thursday.

"It is difficult to make a public announcement on this, given the issue's sensitivity, but the heliport repair work has already been launched and is quietly under way," a government source said. "This measure is to strengthen our effective control in response to Japan's bolstering of territorial claims over Dokdo."

The construction began in mid-March, and is scheduled to be completed in May, according to an official at the National Police Agency in charge of the project. The project had been delayed due to bad weather, he said.

Further details were not available, such as when the project began and when it will be completed.

The 20-by-20-meter heliport was completed in 1981 after two years of construction. The government had set aside a budget for its renovation after safety checks had shown that the aged facility needs to be fully repaired.

In other efforts to enhance Seoul's control of the islets, the government plans to speed up the construction of a residential facility on Dokdo to complete it by May while establishing a maritime science base in waters about 1 kilometer northwest of Dokdo. 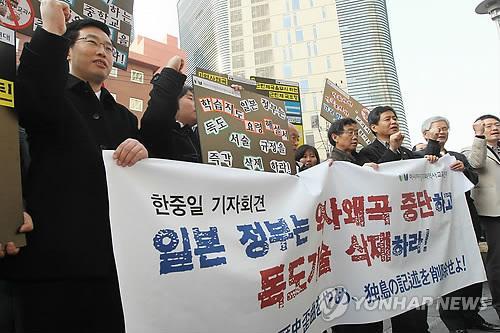 Japan's claims over Dokdo have long been a thorn in relations between Seoul and Tokyo.

South Korea rejects the claims as nonsense because the country regained independence from Japan's 35-year colonial rule in 1945 and reclaimed sovereignty over its territory, including Dokdo and many other islands around the Korean Peninsula.

Since 1954, South Korea has stationed a small police detachment on Dokdo.

In particular, the number of textbooks claiming South Korea is "illegally occupying" Dokdo rose from one to four.

Japanese school textbooks laying claims to Dokdo or glorifying the country's wartime past have long been one of the sticking issues that have frayed ties between the two countries as resentment over Japan's colonial rule of Korea still runs deep here.

The latest Japanese claims, however, could be even more frustrating to South Koreans as they came at a time when Koreans have been pouring out sympathy and support for the former colonial ruler suffering from a devastating earthquake and tsunami earlier this month.

But South Korea says the humanitarian assistance is a different matter from the textbook issue.