The nation’s cinema operators are fuming about proposed federal rules that could require them to disclose the calories in their concession food ― including popcorn, a highly profitable item for theater chains.

Regulators could issue final rules as early as Wednesday that would force movie theaters to post calorie counts for popcorn, pretzels, hot dogs and other prepared foods sold in their cinemas. Packaged foods such as candy already carry nutritional information.

A provision in the federal health care law stipulates that restaurant chains with at least 20 U.S. locations must provide the calorie content of menu items. Last summer, the Food and Drug Administration indicated that it intended to apply the provision not only to restaurants but also to grocery stores and concession stands, including those at theaters.

Alarmed at the prospect, representatives of the National Association of Theatre Owners have been lobbying the FDA and congressional staff members in recent weeks to exempt theaters from the nutritional labeling requirement.

They argue that the proposed rules are an unwarranted intrusion into their business because people visit theaters to consume movies, not food.

“We’re not restaurants where people go to eat and satisfy themselves,” Gary Klein, the theater trade group’s general counsel said. “It’s dinner and a movie, not dinner at a movie.”

Theater operators have a vested interest in fighting the proposed rules, as they generate up to one-third of their revenue from selling popcorn, sodas and other snacks. Popcorn is especially profitable. As David Ownby, the chief financial officer of Regal Entertainment Group, the nation’s largest theater circuit, recently said at an investor presentation, “We sell a bucket of popcorn for about $6. Our cost in that $6 bucket of popcorn is about 15 cents or 20 cents. So if that cost doubles, it doesn’t really hurt me that much.”

The lobbying by the theater association, first reported by Bloomberg News, has put it sharply at odds with the National Restaurant Association, which favors including cinemas in the food labeling rules, and consumer health advocates, who have long criticized theaters as selling unhealthful snacks. 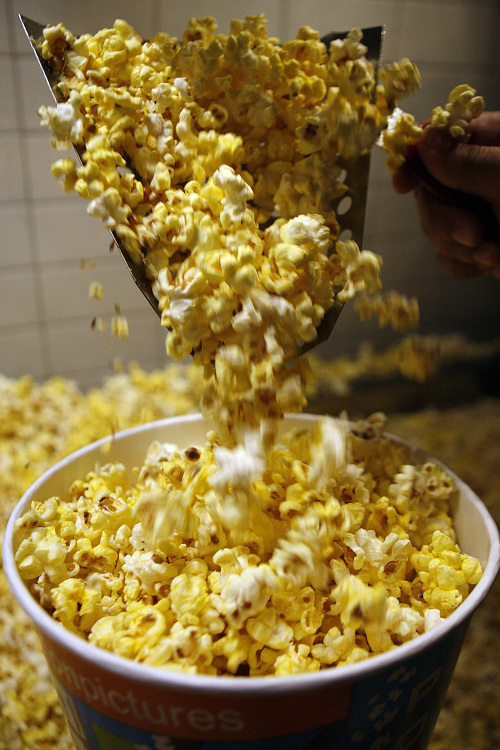 A 2009 survey based on laboratory tests conducted by the Center for Science in the Public Interest in Washington found that a large popcorn serving contained as much as 1,460 calories ― which is the equivalent of eating nearly three McDonald’s Big Macs.

“If a movie theater is going to be serving people with 1,000-calorie tubs of popcorn, the least they could do is tell people about it,” said Margo Wootan, director of nutrition policy at the center. “Just because you happen to be doing something else while you’re eating doesn’t mean that those 1,000 calories won’t stop going to your waistline.”

Representatives of Regal, AMC and Cinemark declined to comment on the proposed guidelines. Some circuits are planning to add more healthful items to their menus. Next month AMC, for example, will introduce AMC Smart MovieSnacks in all of its theaters, featuring fruit chips, popped corn chips and trail mix.

The major chains already report calorie information at theaters in California, under a law that took effect last year, as well as in New York and other cities that already require such disclosures.

But theater executives contend that such disclosures should be voluntary and that they’re only selling customers what they want.

“The average person goes to the theater four times a year,” Klein said. “I don’t think they care.”

When theater chains introduced more healthful items such as air-popped popcorn in the mid-1990s, consumers balked. Last year, at the industry’s annual convention in Las Vegas, cinema executives reacted coolly to a suggestion from Sony Pictures Entertainment Chief Executive Michael Lynton to “consider adding healthier items to your menu” such as yogurt, granola bars and vegetables to address the nation’s obesity problem.