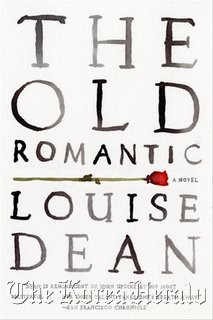 It’s easy to imagine readers being scared off by the all-saturating Englishness of Louise Dean’s novel “The Old Romantic,” published last year in the U.K. and this month in America.

Start with unfamiliar references to Selfridges, Wade Whimsies, Maltesers and the Krankies (which are, respectively, a department store, porcelain figurines, candy and Scottish comedians, if you’re interested). Add a dash of working-class dialect and slang, including an old man who drops his consonants and uses “cor!” and “coo!” as exclamations.

Even more alien, the novel deals with that typically English obsession: class (Americans might live with even sharper class distinctions, but we’re better at pretending they don‘t exist).

The setting is the down-and-out coastal city of Hastings, where “people seem to tumble down ... and not get up to go home again. It’s where they turn up, every Jack and Jill that ever fell out with the family, lost a job, had half an idea, got a bad habit.”

Dean’s main character has left all that behind. Educated at Cambridge, living prosperously as a family law solicitor, he’s changed his name from Gary to the more posh Nick, and cut off ties to his bumptious working-class family. He’s a snob, but his divorced parents are such stubborn and difficult people that it’s easy to understand why he wants nothing to do with them.

After years apart, they are drawn together again because Nick’s elderly father, Ken, believes he’s going to die soon and asks Nick to draw up a will. You can feel it coming, can’t you? Your heart is about to be warmed as the distant son rediscovers his sentimental attachment to his parents, a prodigal son come home to even more prodigal parents.

It might be a conventional plot, but it’s where the book works well. The particulars of southeastern England may be foreign to American readers, but the leap away from home and its lingering regrets are not. We polish our accents, our tastes and manners grow more sophisticated, but home and family are still there under the surface. Nick and his brother, like their father, “were sons of this land, this corner of England. This land made them, it made the people who made them, and gave them certain interests and manners that you couldn‘t change in one lifetime.”

Certain moments in this novel struck me as mawkish and conventional, as though it were written with a screwball TV family comedy in mind, but Dean’s writing is generally funnier and darker than that.

There’s a fantastic scene where Ken, who has developed something like a crush on a younger funeral director, goes to see her embalm and prepare a body for viewing. It’s gruesome, vividly imagined and surprisingly funny, and it pushes the old man to consider his own mortality and the mistakes he’s left unresolved.

And if “The Old Romantic” sometimes lapses into sentimentality, what of it? We’re all sentimental about our own families and maybe have the right to be. They are the first people we love deeply, before the complications of the rest of our lives.

Near the end of the book, Nick sees his mother’s short, strong fingers on the kitchen counter and remembers, “Those hands were his first toys.” Call it sentimental if you like, but it’s also sweet and genuine and universally true. (AP) 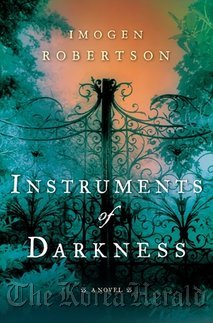 In early June 1780, London was ravaged by anti-Catholic rioting, fueled by anti-Catholic sentiment sparked by a recent act of Parliament that eliminated previously imposed penalties and restrictions on the British Catholic population.

Called the Gordon Riots after the leader of the uprising, Lord George Gordon, it was a weeklong reign of terror that decimated shops and houses and left many dead. And, as it forms the historical backdrop of Imogen Robertson’s debut novel, it lends a heightened sense of danger and suspense to an already thrilling tale.

The novel opens away from London, in Sussex, as Harriet Westerman finds a dead man on her property. The unknown man carries a ring with him bearing the crest of Thornleigh Hall, the head of which is now an invalid whose oldest son disappeared years ago and whose second son is an alcoholic veteran of the war against the American colonies.

To find the murderer, Westerman enlists the help of Gabriel Crowther, a reclusive anatomist who is something of the town boogeyman by virtue of his profession and his “appalling lack of manners.” They are well matched in spirit and intellect, and their developing friendship is one of the most delightful aspects of the novel.

Meanwhile, in London, shop owner Alexander Adams is murdered (in front of his children, in a particularly chilling scene), and his death is connected to the murder in Sussex. This much is clear from the beginning; the entire story is far more involved, and Robertson deftly and expertly doles out each reveal.

“Instruments of Darkness” is a thoroughly engaging novel, with rich prose and an intricate, suspenseful plot, with melodramatic, Gothic touches in perfect keeping with the historical period.

Robertson writes with such a lively, light touch that the grisly mystery never feels overwhelmingly dark or heavy. Robertson has already written another Westerman/Crowther mystery due in the U.S. in April; let us hope for many more. (AP)