"I am very fond of Mongolia as if it were our brother nation, as South Korea and Mongolia share many similarities in terms of their ethnicity and language," Moon said while meeting his Mongolian counterpart in a bilateral summit in Vladivostok. 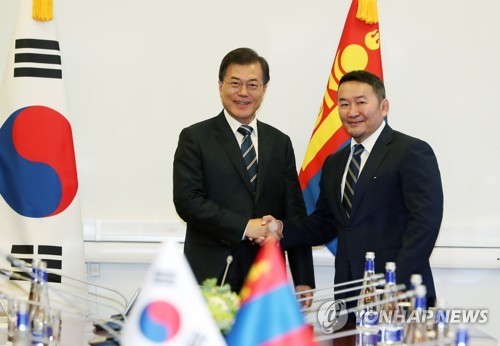 The two leaders are here for the third Eastern Economic Forum, a regional economic summit hosted by Russia that is partly aimed at developing the Russian Far East.

"I hope today's meeting will provide an opportunity to enhance my personal trust with you president and to develop the relationship between our two nations," the South Korean leader said.

Battulga, who took office in July, said he too had a great interest in South Korea, noting South Korean businesspeople made up the largest group of foreign residents from a single country in Mongolia, according to pool reports.

Moon said he hoped to greatly improve the countries' bilateral ties during his five-year term that will end in 2022. (Yonhap)