[Weekender] Riding into the new year

For Koreans, the horse has been a stable source of nutrition, a dear friend, an efficient means of transportation, and a symbol of power.

From Jan. 13, 2014, to Feb. 18, 2015, people here and across East Asia will celebrate the Year of the Horse, which is associated with stamina and power and also represents practicality and obedience to nature.

The first sign of horses on the Korean Peninsula dates back to the Bronze Age. The earliest remains were discovered in Danyang, North Chungcheong Province, where a horse jawbone was found.

“In those days horses were simply food,” said Lyeom Gyeong-hwa, a researcher at the National Folk Museum.

As time passed, people came to value horses as something more than a source of meat and began to tame it by putting a bit in its mouth, at the small gap in front of its teeth. Throughout the era of the Three Kingdoms (B.C. 18-660), horses became an invaluable means of transportation in wartime and for government officials.

Following the Mongolian invasion of Goryeo in 1218, horse breeding became directly related to national security. The government created a large ranch in the far southern island of Jeju and used the animals in times of war or other emergencies. Several “mateuri,” or horse whisperers, remain in Jeju, and are said to be able to understand and communicate with the animals.

The tradition continued as horse breeding became easier and ownership was allowed to aristocrats. Still, during the Joseon era (1392-1910), the government was entitled to requisition privately owned horses when needed.

The horse remained a trusted means of transportation until the late 1960s, when large roads were constructed and automobiles replaced them.

Ancient Koreans believed that horses delivered the spirit of the dead to a better place. Statuettes of horses, as messengers of spirits, have been discovered at their tombs. People would bury horses alive when influential people died, to help them reach the afterlife.

The horse was also considered an auspicious animal. The myth of Park Hyeokgeose, the founder of the ancient kingdom of Silla (B.C. 57-A.D. 992), tells that the king was born from an egg laid by a horse. King Geumwa of East Buyeo (B.C. 60-B.C. 20) was also found by a horse when he was an infant abandoned deep in the forest, according to folklore.

In Gongju of South Chungcheong Province is a Maseonghwangdang, a village shrine dedicated to horses. As many shamans believed that special ghosts wandered this world on spirited horses, horses also became the subject of worship.

“When people believed in gods that rode horses, worshiping the animal seems to have been part of the tradition,” Lyeom said.

And in Joseon, the horse became part of the regalia of the ruling class. King Taejo, the founder of the Joseon dynasty, ordered paintings of his eight beloved stallions, taken after the myth of King Mu of the ancient Chinese Zhou Kingdom, who had inspected his kingdom flanked by eight of his best stallions to boast his power. The painting of the horses was modified and spread throughout the dynasty as a symbol of the king’s integrity.

The horse’s purpose in modern life

No one rides horses to commute anymore, but the powerful, vigorous and tough image of a stallion still remains in the everyday lives of Koreans.

“Koreans have always wished that the animals of the year they were born could represent them for a lifetime. Many dreamed of the horse to grant them powerful, energetic and smart lives and believed that those were part of their own personality,” said Cheon Jin-gi, director of the National Folk Museum.

Proverbs also support how people viewed animals. “A horse without legs goes a thousand miles” warns rumormongers of the damage of groundless information, while “when the horse goes crazy, so does the cow,” mocks people who copy others’ behavior without contemplation.

The horse has been used as a direct symbol for products in modern days. Brand names for automobiles such as Equus, Pony and Galloper reflect a powerful engine. Emblems of carmakers such as Porsche, Mustang and Ferrari include the figures of the horse, and luxury brands such as Hermes, Ferragamo or Gucci, which started their businesses based on equestrian goods, maintain the horse’s reputation as part of high society.

Moreover, the horse has become an industry itself.

From breeding, training, distribution and utilization as well as all other secondary business territories such as leisure, sports and therapeutic purposes, horses create a large market full of potential for job creation and exports.

According to the Korea Racing Authority, the industry accommodates roughly 20 or more distinct businesses and spins off including cosmetics, horsehair mattresses, medicinal supplies and fertilizer. 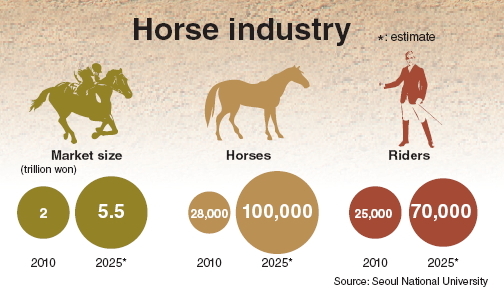 The government has set out to nurture the industry.

It has created a five-year plan aimed at fostering 50,000 horses, 3,000 ranches, 500 equestrian centers and 50,000 riders by 2016. If successful, the plan would ultimately create 10,000 jobs and sustain an annual industry-wide contribution to the economy of 150 billion won, according to the Korea Racing Authority, which has been assigned with carrying out the blueprint.

Horseback riding is the key to the state-designed plan. The leisure activity is known to have already vitalized many developed European nations including France and Germany, which respectively have about 2.2 million and 1.7 million horseback riders. Each country reportedly operates more than 7,000 horseback riding facilities and has created approximately 70,000 related jobs.

According to Lee Sang-man, an official from the Ministry of Agriculture, Food and Rural Affairs, the horseback riding industry holds tremendous potential for growth as a developed-nation leisure industry. The government is planning to encourage further exchange between the city and rural areas, hence behaving as a major growth engine for the agricultural industry.

But questions remain over whether horses could ever become a mainstream part of sports and, moreover, the economy. The government has promised 52 billion won in annual investment for the industry, but it has yet to be allocated. According to insiders, it has only handed over 19 percent of the initially required amount and this figure is unlikely to go up.

The public’s reluctance to accept horse riding as well as the industry itself is a hurdle, too.

“Still, once the government’s plans gain stability, the horse industry will indeed become a dynamic boost for the Korean industries and its overall economy,” an observer said.

By Bae Ji-sook and Kim Joo-hyun