What’s out there for foreigners battling addiction, depression or mental illness


It’s Saturday night in central Seoul. A friendly group of mostly expats has gathered at a local meeting spot and are making introductions.

“My name’s ‘Sam’ and I’m an alcoholic,” says the first, to a warm response. This is an open meeting of Alcoholics Anonymous, one of the help services available to foreigners in Korea.

“I think Korea is a drinker’s paradise,” said “George,” a member of AA since 2002. “For an expat that has made Korea their home, becoming a part of the culture is very difficult if you cannot or will not drink ... If you drink and have a problem with it, Korea is certainly not a place to make it easy to stop.”

For “Simon,” moving to Korea with only three months of sobriety proved too much and he relapsed after two months of being here. It took a six-year battle and the “tough love” of AA, but he has now been sober in Korea since 2001.

The apparent suicides of two foreigners in Busan recently have directed attention toward English language help services here, indicating that access could be improved ― not just for alcoholism and other addictions but also for problems such as depression and other psychiatric illnesses.

Rachel Bailey, national communications officer for the Association for Teachers of English in Korea, said there is help out there ― from counseling sessions to support groups ― but the biggest problem is knowing it exists. 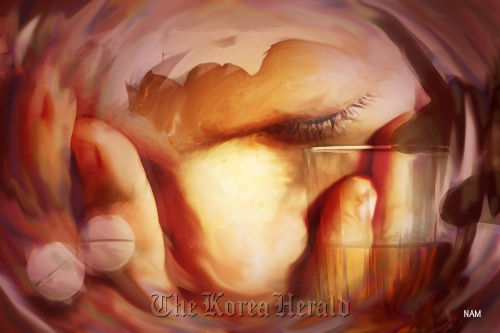 For many issues, the first professional you encounter will likely be a doctor. Except as this is Asia, not only will the language present obstacles, but attitudes and treatment styles are also likely to be different.

For people with addictions, there may be an emergency situation, or they may need detox treatment to minimize symptoms of withdrawal. Medication for depression or other mental health problems may also be necessary.

International clinics, such as Itaewon’s International Clinic in Seoul, are the most obvious choice. But, according to Liz Suk, a counselor here, most psychiatrists in Korea are required to study in English, so they should have a good grasp of the language.

Dr. Yoo Byung-wook, of Soon Chun Hyang University Hospital in Hannam-dong, Seoul, said it is essential that your doctor refers you to a psychiatrist if you are in need of medication, as psychologists cannot make prescriptions.

In an emergency situation or during a holiday, he said, call 1339 and use the English option to be put in touch with the appropriate medical service.

As with AA, many find comfort in talking through their problems with others who have suffered similarly. Ideas touted online that foreigners should create their own help services are perhaps most achievable in this sense.

Expat Michael Slechta has taken the initiative and is in the process of establishing a peer support group for those with mental illness, through his website: www.onemindhelp.blogspot.com. In what he believes will be the first group of its kind in Korea, he hopes to create a “safe” and non-judgmental space, providing a support network away from home.

It would meet bi-monthly and on a confidential basis as Slechta is aware that foreigners can be wary of revealing their condition in case it has repercussions.

He said this kind of service ― a relatively new initiative in his native Canada ― helps to empower people with mental illness, removing them from the power relationship that can be felt between therapist and patient.

Information about AA can be found at: http://www.aainkorea.org/. The group also distributes relevant literature to hospitals and clinics as a way of raising awareness.

Noreen Jaden, Canada-registered psychologist and CEO of Adaptable Human Solutions in Seoul, thinks that although there are still difficulties, access to services like counseling is becoming quicker and easier.

Her team of North America-qualified expat and Korean counselors works with clients on a range of issues including anxiety, depression and problems with adjustment. But, she said, clients must be well-informed about the services available before choosing help that will suit them. She suggests those looking for counseling make telephone enquiries to various services before choosing.

Suk, who has 13 years experience of counseling in America, set up her practice after realizing there was a void in the market. She agrees that “one mold doesn’t fit all.”

For counseling to be accessible, it must also be affordable, she says. She operates her practice in Hyehwa-dong, Seoul and offers a sliding scale fee ― arranged on an individual basis ― for clients after their first session.

Although she said many people contact her with anxiety issues, she deals with problems ranging from eating disorders to relationship difficulties.

For some expats, the language barrier, cultural differences and being away from friends and family are not all that is making life difficult. For those living outside of Seoul, the chance of isolation and the feeling that there is nowhere to get help can be more acute.

“Probably the hardest thing about getting sober in Korea is the ease and convenience of getting to meetings. The logistics of getting around in the city are good, but once out of Seoul, it can take two or more hours,” said “Simon.”

ATEK is also concerned about isolation. But, said Bailey, “ATEK’s leadership will do our best to connect people in the country with helpful resources.”

Suk said that although issues may exist before coming to Korea, a sense of being alone ― especially physically in an isolated community ― can heighten negative feelings or symptoms.

“The first thing I would do is to reach out to other foreigners or others within some kind of forum ... and then also reach out and try to find a professional who might be able to support you,” she added.

Some counseling services also offer Skype sessions or telephone services for those unable to make it to Seoul for meetings. There is also Skype AA.

In response to last month’s deaths, the medical and online expat community are expressing a desire for further dialogue and change.

Bailey believes increased communication is key ― online between bloggers and on forums, and through advertisements in foreign publications here.

And it seems there is plenty still to be done. According to a spokesperson at the Ministry of Health and Welfare, for instance, there are currently no official non-Korean emergency suicide hotlines, and no plans to create one as demand is not considered sufficient.

However, ideas are in the offing. Suk suggests a system built by expat organizations here that can be incorporated into the existing Korean health care structure.

“If there are organizations like AFEK (the Association of F-Class Expatriates in Korea) or ATEK or other organizations that could really come together to create this system ... then I think that would be a movement,” she said.

ATEK have also begun compiling a database of help services for expats which can be accessed at http://atek.or.kr/ mentalhealth.

“Don’t go it alone. Contact an ATEK Emergency Needs Officer. For that matter, if you are facing a serious problem that you think threatens your life or health, contact any of ATEK’s leadership and we will rally the full force of our knowledge, experience and compassion to connect you with the resources you need and give you a listening ear in the meantime,” said Bailey.

Anyone with further information on help services for foreigners should e-mail ATEK at media@atek.or.kr.